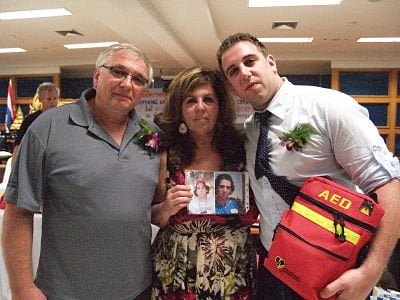 PHUKET: Noah Yelizarov, the 18-year-old who died in a freak accident in Phuket in October 2004, can rest in peace knowing that others will be spared his tragic fate. He was electrocuted when he inadvertently touched a live wire during a monsoon.

The Vancouver Sun reported yesterday that local firefighters in Phuket had informed the victim’s parents that Noah might have survived if the Phuket emergency personnel had been equipped with an Automatic External Defibrillator (AED). The device shocks the heart, allowing it to re-establish an effective rhythm.

Upon hearing this, Noah’s parents vowed to outfit the resort island’s emergency response units with AEDs.

This was achieved in six weeks ago when six AEDs engraved with the words “Noah’s 2010 Journey” were presented to Phuket firefighters by Canadian organizers, including Noah’s parents.

For further details on this story, see the Phuket Gazette‘s news reports of March 30 this year and October 11, 2004.

Hotel Chatter
The tech-savvy resort Anantara Phuket on Mai Khao Beach now has guests able to borrow the most recent development in Apple technologies, the iPad.

It is available directly from the hotel and guests can use it to read newspapers, book a massage at the Anantara Spa, and even schedule a diving excursion to the Similan islands.

The resort says the iPad can also be used poolside or sailing through Phang Nga Bay, but does ask that guests don’t drop it in the water.

Mcot
The Red Shirts have apologized for their storming of Chulalongkorn Hospital in Bangkok on Friday.

On Friday afternoon, protesters temporarily dismantled their blockade, made up of car tyres and sharpened bamboo sticks, which had made it impossible for emergency cases to enter the hospital, situated on the border of the protesters’ encampment.

This action was reversed a few hours later, however, after Maj-Gen Khattiya Sawasdipol, a staunch supporter of fugitive former prime minister Thaksin Shinawatra, turned up and told the protesters to reinstall the blockade.

As senior police officers were requesting the protesters to remove the blockade yesterday, Khattiya, now suspended from duty, appeared and told the demonstrators not to obey. Protesters then surrounded the police officers who later withdrew into the hospital.

Eventually, the road blockade was removed and protest leaders apologized for placing at risk the lives of ambulance-borne casualties bound for the hospital’s emergency room.

Pornthep Eamprapai, the director of the Office of the Narcotics Control Board in Chiang Mai told The Irrawaddy on Friday that the three dead suspects, believed to be an ethnic Wa and two Lahu, were attempting to smuggle drugs into northern Thailand.

Some 200,000 methamphetamine pills, an AK-47 rifle and grenades were found after the fighting, he said.

“We are worried about the increase in drug trafficking,” said Eamprapai, adding that the army has stepped up vigilance along the border.

Phuket not immune to red damage