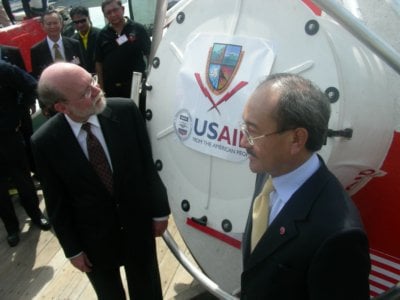 CAPE PANWA: A ceremony was held yesterday morning to commemorate the launch of the first US-built Deep-ocean Assessment and Reporting of Tsunamis II (“DART-2”) tsunami-detection system, now aboard the Royal Thai Navy’s MV Seafdec on its way to be deployed at a location in the middle of the Indian Ocean in a few days’ time.

The detection system, built by the US National Oceanic and Atmospheric Administration (NOAA) at a cost of about 16 million baht, consists of a single buoy to be anchored to the seabed at a depth of about 3,500 meters. Connected to the buoy and sitting on the seabed at the same depth will be water-pressure sensors that can detect tsunami waves and, through the buoy, relay warnings to the World Meteorological Organizations Global Telecommunications System (GTS) satellite for early warning across the region.

The DART-2 buoy is the first in an array of 24 deep-ocean buoys planned by UNESCO’s Intergovernmental Oceanic Commission, which oversees the development of the Indian Ocean regional tsunami warning system.

The first DART-2 buoy is being deployed through a partnership between the Thai and US governments, following negotiations begun earlier this year between NOAA and the Thai Ministry of Foreign Affairs, represented at yesterday’s ceremony by Thai Foreign Affairs Minister Nitya Pibulsonggram. Representing the US was US Ambassador to Thailand Ralph Boyce.

Also in attendance were officials from USAID, which manages the US contribution to the Indian Ocean Early Warning System (IOTWS), and numerous Thai government officials, including Dr Smith Thammasaroj, who heads the Nonthaburi-based National Disaster Warning Center, which was established after the 2004 tsunami.

Dr Smith told reporters that MV Seafdec would reach the deployment site, located midway between Thailand and Sri Lanka and about 1,100 nautical miles from Phuket, some time tomorrow.

After its deployment, the system will be tested and monitored to ensure it is functioning properly before MV Seafdec returns to port. The entire mission is expected to take about seven days. It was important to the Thai people have the system operational before December 5, HM The King’s 79th birthday, he said.

The DART-2 system, which has an expected operational life of two to four years, will be handed over to the Thai government after two years, he said.

The US is funding two more DART-2 buoys to be deployed off the Indonesian Islands of Sumatra and Java in 2007, he added.

Dr Smith described the tsunami-warning system currently in place in Thailand’s six Andaman Coast provinces as “good”, but said he would only be satisfied after the two buoys are deployed off the coasts of Sumatra and Java, sites much closer to Phuket than the remote location chosen for the first buoy.

In the event of a future tsunami, an array of buoys should provide Thailand’s Andaman Coast with a critical 75-minute lead time during which national governments can relay warnings to local officials, who will warn coastal residents and coordinate emergency evacuations, he said.

Direct real-time detection will also eliminate the need for “false alarm” tsunami warnings issued solely by based on seismic data, he added.