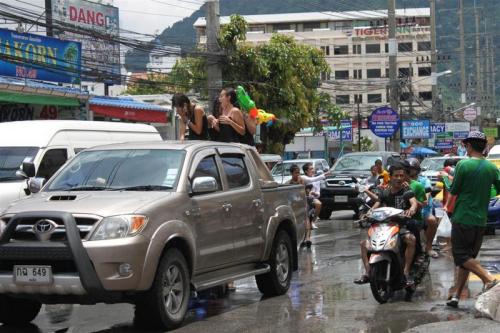 PHUKET: Deputy Interior Minister Chat Kuldilok yesterday announced that people engaging in running water battles from the backs of trucks and pickups during the upcoming Thai New Year Songkran festival will be subject to criminal charges.

The news follows a meeting of the national Road Safety Center on Thursday to draw up road-safety measures to be enforced during Songkran, Lt Gen Chat explained.

“The number of road accidents during Songkran is much more than normal, so this year we have launched new road-safety plans.

“There will be no truck water fights on the road and each province must set water-play zones. The zones are to be set at the provincial governors’ discretion,” he said.

Gen Chat warned New Year revelers that they will face legal consequences if they ignore the play zone and no truck fight rules.

“Whoever breaks the regulations will be charged with causing a public nuisance or endangering public safety,” he explained.

Police will strictly enforce the road-safety laws during the Seven Days of Danger, from April 11-17, especially speeding, overloaded vehicles and other violations, Gen Chat said.

“I’d like to reiterate that whoever is caught drunk driving will be imprisoned for up to six months, fined up to 10,000 baht, or both,” he added.

San Jantharawong, chief of the Phuket office of the Department of Disaster Prevention and Mitigation (DDPM), last week told the Phuket Gazette that the water-play zones are expected to be set at a meeting on Wednesday (story here).

Phuket hotels given one month to start reporting foreign guests