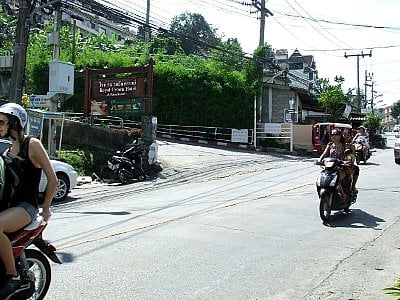 PHUKET: The driver of the truck involved in the horrific road accident that claimed the life of an Indonesian woman and her unborn son in Patong yesterday has been charged, police told the Phuket Gazette today.

“He has been charged with with reckless driving causing death,” he said.

The Indonesian woman, 30-year-old Erna Dahlan, was riding pillion and side-saddle on a motorbike operated by her British husband when the two vehicles collided.

She fell off and was run over by the truck’s rear wheels. Both Ms Erna and her unborn child were killed instantly.

Mullika Satupak, a 72-year-old who runs a tailor shop in the area, witnessed the accident.

She told the Gazette that Mr Dahlan was riding in the northbound lane of the narrow Nanai Road and turned right onto the steep access road that leads to the Royal Crown Hotel.

Meanwhile, a cement truck whose driver had the same destination in mind swung wide into the oncoming lane before turning into the narrow street, probably in order not to lose too much momentum as he started his ascent up the steep hill, she said.

The two vehicles met at the base of the hill, with horrific results for the Dahlan family.

“The couple hit the side of the truck and the bike went down. Ms Dahlan was thrown under the vehicle,” she said.

Phuket Kusoldharm Foundation rescue workers were notified of the accident at about 4pm. They took Ms Dahlan’s body to Patong Hospital.

The English man suffered only minor injuries but was deeply traumatized.