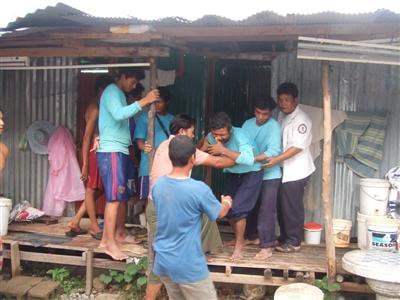 PHUKET: A sick and destitute Burmese worker was the second man to take his life by hanging in Phuket’s Srisoonthorn sub-district yesterday.

Just hours after Thalang Police responded to a report of suicide-by-hanging that morning, they were informed at 4:30pm that a Burmese worker at the nearby ARE HAWKS Construction Company workers’ camp had taken his life in similar fashion.

Arriving at the scene, on the road from Ban Don to Ban Ya, they found a crowd of Burmese workers gathered around the entrance to one of the many zinc-roofed shacks set up by workers at the camp.

Inside the room they found the body of a male suspended by the neck from a support beam by a thick nylon cord.

Fellow workers identified the deceased only as “Chaw”, a 26-year-old who had been living in Phuket for five years.

The late Mr Chaw did not go to work that day and had been complaining of stress relating to a variety health and financial problems, colleagues said.

This was likely the reason he chose to end his life, they said.

There were no signs of foul play in the room, where two bottles of prescription medication were found.

Phuket Kusoldharm Foundation workers cut down the body and transported it to the Thalang Hospital morgue for further examination and storage until it can be claimed by relatives.

Phuket Retail: Staff productivity, not piracy, the key to success