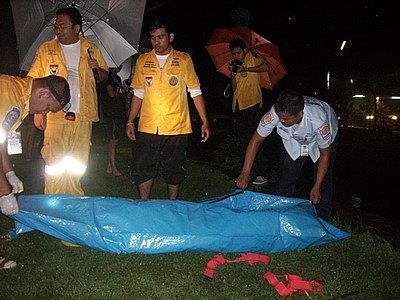 PHUKET: A Nepalese tailor drowned when his car plunged into a canal in Phuket’s Thalang district last night.

Thalang Police were notified of an accident near the TOT offices on the road to Ban Don at about 9:40pm.

At the scene, police and rescue workers found a Phuket-registered Honda Civic almost fully submerged in fast-moving floodwaters in the roadside klong.

Working in the dark, difficult conditions they managed to pull the body of the driver from the wreckage. He was later identified as Ohn Bahadur, an ethnic Nepalese from Burma who ran a tailor shop near the entrance to the Laguna Phuket resort complex.

Initial police investigation revealed that Mr Bahadur was making a delivery to a customer to a resort hotel in Mai Khao when he lost control of the car in rainy conditions and plunged into the canal.

Mr Bahadur apparently opened a window to try to escape, but the force of the floodwater was too strong and he drowned, police said.

After efforts by Phuket Kusoldharm Foundation workers failed to revive the deceased, his body was taken to the Thalang Hospital morgue for further examination and storage until claimed by relatives.

Tropical depression: two suicides in Phuket in one day