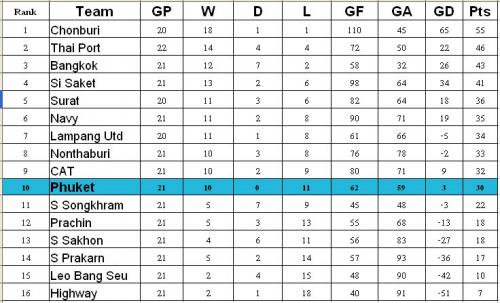 PHUKET: Goals in each half secured a 2-0 victory for Lampang United last night against a travel-weary Phuket United in Lampang city, just south of Chiang Mai.

Lampang’s Natee Ji-pon scored half way through the first half, while Naritcha Saengthong solidified his side’s victory with a goal late in the second half.

As a result, Phuket dropped down to 10th place of the 16-team Thailand Futsal Premier League 2012-2013 table, while Lampang retained their 7th place standing.

The Andaman Pearl boarded their bus for the 20 hour ride back to Phuket to prepare for their next match against 2nd placed Thai Port FC.

Though the match is scheduled for 7pm this Saturday, fans should check the Gazette Sports section online for confirmation updates.

Kickoff for that match is set for 5pm.

Phuket United Secretary Samak Rattanadilok-na-Phuket told the Gazette that he would see if he could negotiate a schedule change for Phuket United’s match to either kickoff earlier or later, so that fans had the opportunity to see both Phuket football and futsal matches on Saturday.

“This is hard on the team, especially this week where we had a home game on Saturday, then traveled to Lampang for a game on Wednesday, only to come back to play in Phuket again three days later…

“Either way, I will see with the other team [Thai Port] and league organizers if we can change the time or not.”

An apology was issued on behalf of Phuket FC President Pamuk Achiriyachai, posted on the club’s Facebook page today (February 14), announcing that the match between Phuket FC and SCG Muang Thong United has been canceled, citing “complications with airline reservations”.

The post did not mention whether the match would be rescheduled or not.

At the time of update, the futsal match between Phuket United and Thai Port FC is still scheduled for 7pm on Saturday. The Gazette will post any changes online as they come.