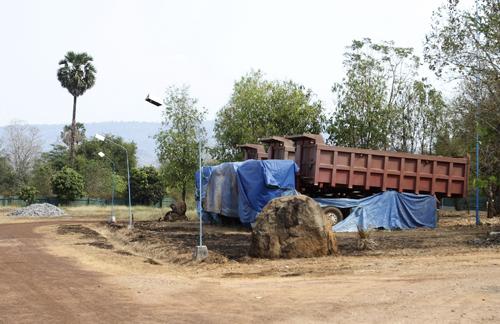 PHUKET: The remote district of Rovieng was once a battleground between Cambodian government troops and Pol Pot’s genocidal Khmer Rouge. Unexploded bombs still lurk in its fields and forests.

So does something more desirable – iron ore – and supposedly in such huge quantities two Chinese companies have an US$11billion (7 billion pounds) plan to extract it.

Their proposal – a steel plant and seaport linked by a 404km (251 mile) railroad – has alarmed environmentalists, mystified mining and transport experts, and bolstered Cambodia’s reputation as an agent for Chinese expansionism in a region where the United States is increasingly competing for influence.

It is the latest in a series of mega-projects underscoring China’s growing economic clout in mainland Southeast Asia, while improving China’s access to supplies of raw material and ports in the Indian Ocean and South China Sea.

Work will soon begin on a US$7bn railway through Laos to link China’s Yunnan province with northeast Thailand. And in Myanmar work is almost finished on a US$3bn twin pipeline project to carry oil and gas to Yunnan from Myanmar’s Bay of Bengal coast.

The railway, port and steel project will be Cambodia’s largest, with a price tag not far off the value of the country’s US$12.9 bn economy. The steel plant in Rovieng, in northern Cambodia, will be its first. The seaport on a Cambodian island in the Gulf of Thailand will be connected to the mainland by a 3km (1.9 mile) bridge. The railroad will almost span Cambodia, although its exact route hasn’t been revealed.

“This is 65-per cent iron,” says Sun Qi Cai, 58, caressing a heavy, gleaming lump of Rovieng rock. “Not many places have such high-quality ore.” That includes China, the world’s largest steel maker, where most ore has an iron content of less than 40 percent.

Sun is a Chinese site manager for Cambodia Iron and Steel Mining Industry Group, which on December 31 signed a deal to build the three-part project with China Major Bridge Engineering Co, a subsidiary of state-owned behemoth China Railways Group.

The iron ore is destined for the steel plant – by law, ore cannot be exported from Cambodia. Mining experts could not hazard a guess as to how much ore is recoverable in Rovieng and there was no indication of how much steel it would produce and where the products would go.

Those are just some of the unanswered questions about the project.

China’s clout
Speaking at the signing ceremony, Cambodia Iron and Steel general manager Zhang Chuan You said work would begin in July and be finished within four years. But Cambodia’s transport minister Tram Iv Tek, who also attended the ceremony, professed to know almost nothing about it. The conspicuous absence of authoritarian Prime Minister Hun Sen also left many wondering whether China’s mystery train was going anywhere.

“There are a lot of real things happening here with Chinese money,” says Daniel Mitchell, a long-time American resident who runs a Phnom Penh investment firm called SRP International. “I don’t think this railroad is one of them.”

Mining experts question whether northern Cambodia has enough mineral wealth to justify the project’s costs. Transport experts wonder why the Chinese railroad will not connect with Cambodia’s existing train system, which is already being refurbished at a cost of at least US$141.6 mn, or either of its ports.

The ambitious project could be as much strategic as economic. Chinese investment pledged in Cambodia has totalled US$9.1 bn since 1994, including almost US$1.2 bn in 2011 – eight times more than the United States, according to the Cambodia Investment Board. China is also Cambodia’s largest aid donor.

That money carries political clout. Last year, Cambodia used its powers as chair of the Association of Southeast Asian Nations (ASEAN) to stymie discussion on the South China Sea, where China’s territorial claims overlap those of five other countries. Cambodia emerged as a staunch China ally willing to put the interests of its giant neighbor over those of its ASEAN members.

The lesson for Washington was clear.

“For U.S. strategists, if you neglect certain ASEAN countries you hurt U.S. interests,” says American scholar Carlyle Thayer, an Asia Pacific security expert at the Australian Defence Force Academy in Canberra. “There’s a price to pay … because China’s economic dominance carries political influence, the U.S. has to compete across the board.”

Amateurish facade
Cambodia Iron and Steel doesn’t look like a billion-dollar company or, as Chinese media reports describe it, a Cambodian one.

It is registered to three Chinese nationals who, says Rovieng site manager Sun, are brothers. The only Cambodian found working at its Phnom Penh headquarters, a five-story building flanked by a paint shop and a Korean restaurant, was the cleaner.

Despite its amateurish facade, other evidence suggests that Cambodia Iron and Steel is moving ahead with its project, and Cambodian officials know more than they publicly state.

On July 15 last year, telecoms and electricity officials were summoned to the Ministry of Public Works and Transport to explain to a Chinese representative from Cambodia Iron and Steel where the country’s fibre optic and electrical cables were buried.

“He wanted to know so that the train track didn’t cut through them,” said a Cambodian who attended the meeting.

An official at the company’s Shanghai-based partner, China Major Bridge Engineering, said it would begin construction this year but gave no specific date.

Catalysts for protest
In Myanmar, where a quasi-civilian government replaced a military dictatorship in March 2011, Chinese mega-projects have been catalysts for protest. China armed and supported Myanmar’s hated military during decades of Western sanctions, and is still resented by many people.

In one token of their close collaboration with the government, Chinese projects in Cambodia are often guarded by soldiers or military police. Chinese workers often dress in military fatigues.

No sign marks the entrance to Cambodia Iron and Steel’s vast site near Rovieng village, only a ramshackle house occupied by armed Cambodian soldiers who stopped Reuters from entering.

“I’m scared the Chinese will get angry,” one soldier said.

Som Soeun, 64, a community leader, was among hundreds of villagers who attended a 2011 ceremony in Rovieng to announce the building of a steel plant. Also present was Suy Sem, Cambodia’s Minister of Mines and Energy, who told villagers not to protest against a plant “needed for the country’s development,” Som Soeun recalled.

With the help of local people, Reuters reporters entered the same area and found no sign of construction. Trucks and other heavy machinery lay idle. Lumps of iron ore littered the deserted access roads.

The Cambodia Iron and Steel’s depot in Rovieng village already occupies what used to be community ground: the local soccer field. The depot also lay dormant. A villager who had befriended its few Chinese workers said they complained of being broke, bored an