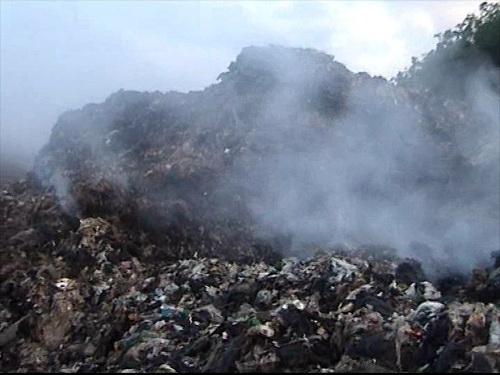 PHUKET: Villagers on Koh Lanta, across Phang Nga Bay from Phuket, have evacuated their homes because of respiratory problems caused by garbage fires at a landfill. Local authorities say they are unable to control the fires.

The villagers sought to publicize the trash burning problem about three weeks ago by appealing to the Krabi Press Club, saying that local authorities had ignored the issue (story here).

Again yesterday, villagers reported to the Krabi Press that the high temperatures were causing more fire and smoke in areas as far as two kilometers from the landfill.

“We reported our problem to the press last month, but we are still being ignored,” said Wissanu Kokyai, a village headman in the area.

“About 10 households with babies have been moved to live somewhere else because of respiratory problems caused by the smoke,” Mr Wissanu said.

San Wachedi, president of the Saladan Tambon Administration Organization (OrBorTor), admitted the landfill area was the responsibility of the Saladan OrBorTor, but said, “It is beyond our authority to fix the problem.”

“Saladan OrBorTor officers tried to put out the fire with water, but it did not work because the landfill is too big.

“For now, I have ordered a backhoe to spread out the garbage and we will continue spraying water on it as a temporary solution,” Mr San said.

“I will take the problem to the district chief and Krabi governor to ask for help in resolving it,” Mr San said.