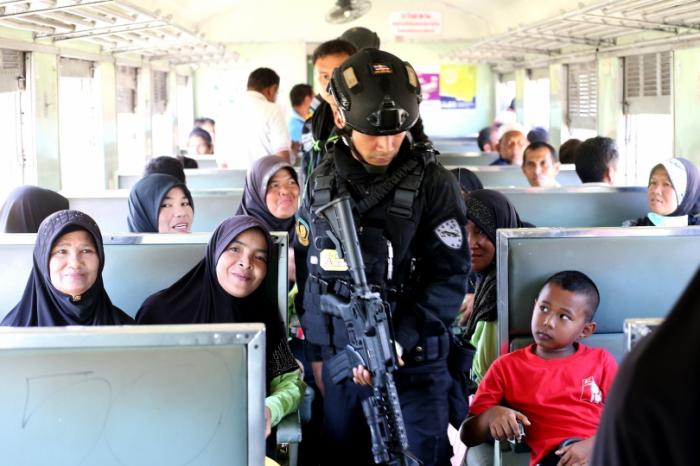 PATTANI: Trains in the Deep South are to resume operations today, in time to serve the surge in Muslim holidaymakers celebrating Eid al-Adha (Festival of Sacrifice), following completion of repairs to railway tracks in Pattani damaged by a bomb blast on September 3.

Thanongsak Pongprasert, deputy governor of the State Railway of Thailand, said yesterday that a train without passengers would undertake a test run from Hat Yai to Sungai Kolok.

The explosion in Pattani’s Khok Pho district on September 3 derailed a passing train and destroyed much of its rear carriage. One SRT employee was killed and three people were wounded.

Hundreds of Khok Pho residents rallied against the violence in the southernmost provinces and prayed for peace yesterday.

The residents, including Muslim leaders, gathered at Khok Pho Train Station, recited a Muslim prayer for peace and expressed their opposition to bloodshed.

The husband died at the scene from a shot in the chest. Aesoh was hit in the stomach and is in critical condition.

Three spent rifle cartridges were found at the scene.

The assailants knocked at the door and when the husband opened it, they shot him twice, police said.

They then entered the house and shot the wife in the bedroom. Police suspect a personal conflict behind the attack.