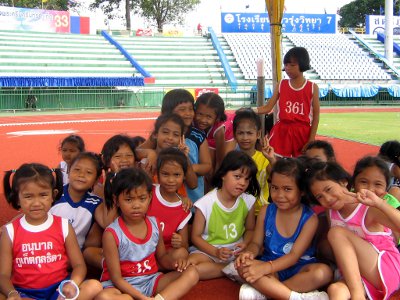 PHUKET: Motorists be warned: today is the busiest day of the year at Surakul Stadium in Phuket Town, where hundreds of primary and secondary school students from all over the province will amass to take part in the annual provincial youth games.

Organized by the pink-clad officials of the Phuket Provincial Administration Organization (OrBorJor), yesterday’s event went off without a hitch, except for some light rainfall late in the afternoon.

Today will prove to be a much larger organizational challenge. Cheering sections for hundreds of supporters from participating schools have been set up around the stadium, while the young athletes will hunker down under scores of tents a set up near the entrance way on Wichit Songkram Road.

Parking in and around the stadium will be at a premium today, so those capable of doing so are urged to take the pink Po Thong buses if possible.

Other motorists will want to avoid the area near the stadium completely, as traffic generated by the event has in the past caused gridlock extending all the way from Phuket Town to the Darasamuth School (Central Festival) intersection.

Fortunately, this year’s event has been scheduled to fall on a public holiday (a substitution day for Constitution Day, which fell on Saturday), so it is hoped that traffic in the area will be less congested than in the past.

Motorists will definitely want to avoid Old Phuket Town in the afternoon, however.

Although the competitions will last all day at the stadium, the official opening ceremony will start with a parade from Queen Sirikit Park in Thalang Road, Phuket Town, through the streets of the old quarter and then on to the stadium along Wichit Songkram Road.

The procession will leave the park on or around 2pm.