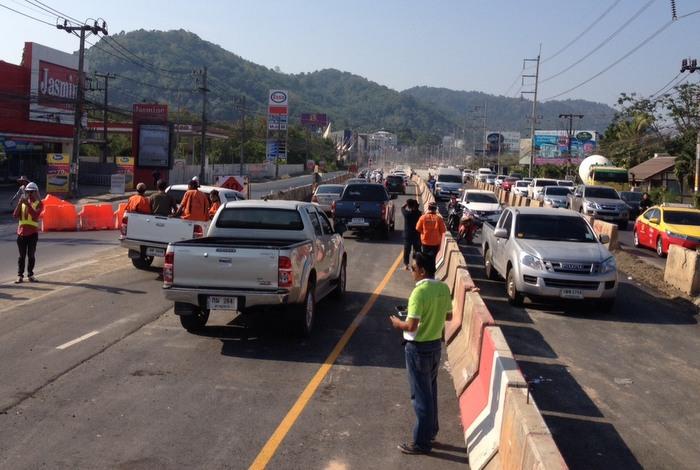 PHUKET: The northbound lane of the long-awaited Samkong Underpass was finally opened for traffic yesterday, after being marred with a deluge of problems.

“The lane opened up at about 4pm,” said Chalermpol Wongkiattikun, the project engineer from the Department of Highways. “So far, traffic has been moving through it very smoothly.”

Construction on the project is now expected to end by July 31.

“Drivers should be cautious while driving through the construction area, as there is still heavy machinery on site,” he said. He suggested using an alternative route if possible.

Two weeks ago, Boon Tapanadul from the Bangkok Ombudsman’s Office, was told that the project, which is worth more than 800 million baht, would be fully operational by May (story here). However, due to endless delays, the Phuket Gazette learned today that the project will not be finished until the end of July. It is more than a year behind schedule.

After three contractually acceptable push-backs of the completion date, Wiwat Construction Co Ltd was allowed a December 21, 2015 completion date, before a daily fine of two million baht was to be charged. However, due to mandatory closure during the New Year holidays, a 30-day grace period was granted, further pushing the date to January 22 (story here).

The project has been marred with mishaps, as rough road surfaces caused numerous accidents, forcing local residents to fix dangerous sections of the road themselves after officials and the construction company failed to act (story here).

A Decade Ago: Parliamentary elections and cable thieves