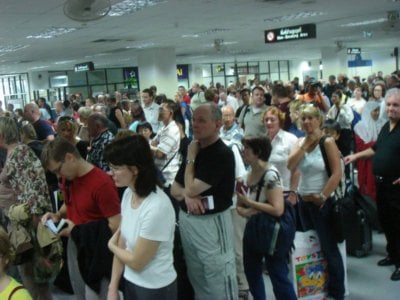 MAI KHAO: Despite having 60 Immigration officers stationed at Phuket International Airport, travelers landing on the island are having to suffer lengthy delays in being cleared through Immigration.

Pol Col Surasak Authapanyawanich, Superintendent of Immigration at PIA, explained to the Gazette that the long delays are the result of a surge in the number of passengers from 3,000 a day this time last year to more than 7,000 a day this year.

Adding to the problem, he said, was that renovations at the airport had forced the closure of two Immigration clearance counters. “Renovations that started in September have forced closure of three out of eight counters,” he said.

However, Col Surasak added that that problem was temporary, as the renovations are due to be finished next month.

Following passenger complaints, two more Immigration counters have been opened, taking the total to seven. Average time to process each passenger was now 40 seconds, he added.

Reassuringly, he told the Gazette that clearing Immigration would be back to normal in January.

Footballer beaten to death in Rawai