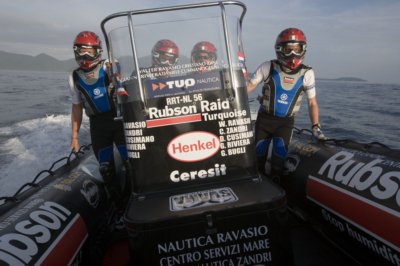 Mr Byshevoy was racing as part of the Ceresit team in the Rubson Raid Turquoise speedboat race. The dinghy flipped on the Day 6 leg of the race, from the Phi Phi Islands to Koh Racha Yai.

The Royal Thai Navy dispatched a helicopter after receiving a call for assistance at 3:30 pm.

Mr Byshevoy was airlifted to the Third Naval Area Command at Cape Panwa before being transferred to Vachira Phuket Hospital by ambulance.

Although a RTN press release said Mr Byshevoy suffered serious injuries to his neck and back, he is now recuperating at Phuket International Hospital. A nurse there told the Gazette that he is expected to make a full recovery.