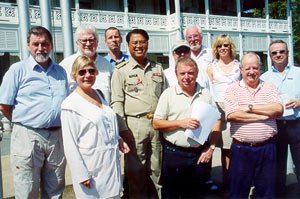 PHUKET TOWN: Phuket Governor CEO Pongpayome Vasaputi today reassured a group of visiting Scandanavian travel agents and print and TV journalists that Phuket was a secure destination for tourists. His visitors came from Denmark and Norway, which, after the Bali atrocity in October, were among the first countries to issue travel advisories warning their citizens to exercise extreme caution when visiting Phuket. “Four million tourists come to Phuket every year,” the governor told them at the Provincial Hall. “So we do our best to maintain good security.” He added that hotels, entertainment places and local residents were cooperating with police to ensure there were no incidents on the island, following the bombing in Bali. The visiting journalists and travel industry executives earlier told the Governor in a letter that they want to help counter the bad publicity resulting from the advisories.