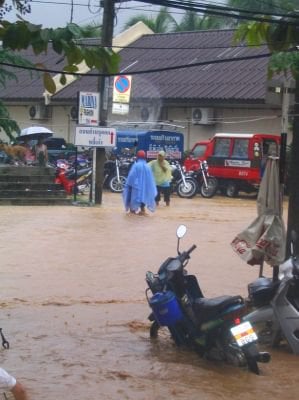 PHUKET: A 19-year-old Canadian tourist was electrocuted by a downed power cable in Patong during Saturday’s torrential rains.

Noah Yelizarov, of Richmond, was found on the sidewalk near the Jintana Hotel. A broken electrical cable was nearby.

Firefighters used a piece of wood to move the cable away and retrieve Mr Yelizarov’s body, but he was pronounced dead at Patong Hospital.

Hospital director Dr Taweesak Netwong, told the Gazette the hospital was unable to supply any more information about Mr Yelizarov because “it’s delicate for tourism”.

The rain – 79.8mm in the 24 hours between 7am on Saturday and 7am on Sunday, according to Vichit Phuangsombat, Director of the Southern Meteorological Center (West Coast) – caused flooding in many parts of the island and a landslide on Patong Hill and along Phra Barami Rd.

Metha Mekarat, Chief of the Phuket Office of Disaster Prevention and Mitigation (ODPM) told the Gazette his office believed the rain had caused damage worth more than 10 million baht.

After a crisis meeting with Vice-Governor Winai Buapradit, emergency services provided food and other aid to 50 families affected by flooding and landslide on Phra Barami Rd, on the outskirts of Patong.

Leading businessman Chairat Sukbal, owner of the Safari Pub and Deputy Mayor of Patong Municipality with responsibility for wastewater, told the Gazette, “Patong has an anti-flood plan but it’s not always possible to resist the water.”