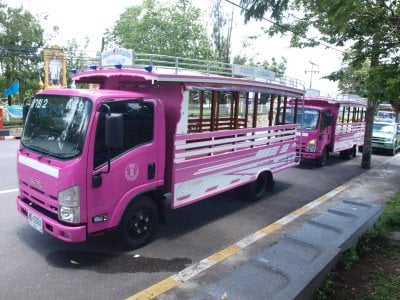 PHUKET: The award-winning Pink Buses in Phuket Town will ply a new route between Saphan Hin and Rassada early next year.

Paiboon Upatising, president of the Phuket Provincial Administration Organization (PPAO), told the Gazette that the new route will be serviced by eight new vehicles, known locally as po thong.

It will be the third PPAO Pink Bus route to be introduced.

“We are assembling two new buses each month… so the buses should be ready by about March next year,” he said.

“The buses will operate from 6am to 8pm, the same service hours used on the first two routes.

“If this new route is well received by the public, it may be expanded [from Rassada Pier] to Koh Sireh in the future,” Mr Paiboon said.

The PPAO will make an announcement when the exact route the buses will travel has been finalized, he said.

Route 1 runs from Big C to Saphan Hin, while Route 2 operates from Super Cheap to the Fresh Market on Chao Fa East Road.

Fares are 10 baht for all journeys. The service is free for children.

As for the illuminated signs now installed at all 73 bus stops, the PPAO is waiting for electricity meters to be installed before they can turn them on.

The same applies for the illuminated route map signs installed at 10 selected stops.

“Once the Phuket Provincial Electricity Authority installs the 83 meters we can turn the lightboxes on at night,” said PPAO technician Pornchai Ngosurachet.