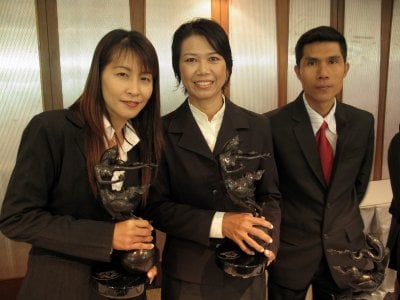 PHUKET: Some of Phuket’s top tour guides have expressed concern that the changing nature of the Phuket tourism industry might render their jobs obsolete in the future.

Tour guide Kittitat Chookaew was among the eight Phuket-based tour guides who received a “Kinnaree”, a national award given by the Tourism Authority of Thailand for excellence and contributions to the Thai tourism industry.

Mr Kittitat, who received his award for his expertise in Italian, said “In the past, Italian tourists usually came as groups of elderly people who could not speak English well. They still needed to rely on our help. But younger Italians are more self-reliant, thus the need for tour guides is declining even though the number of tourists continues to rise,” he said.

Thitinan Poolsanguran, who received her award for her expertise in the Japanese market, agrees.

“With the boom of the Internet, some young Japanese travelers already know beforehand where they want to visit by searching online. They even book tour packages from Japan on their own. And with the recession, they want to pay cheap prices and are not interested in hiring tour guides. Already, we are seeing less demand for tour guides,” she said.

Guides pick them up at Phuket Airport and have only 20-50 minutes while en-route to their hotels to develop a rapport with the tourists and offer them optional tour packages for the second and third days of their stay, she explained.

However, Mr Kittitat said the downward trend in demand for tour guides was not all bad.

“There is a chance that tour guides will survive since the Internet cannot answer everything tourists want to know,” he said.

“As tour guides, we cannot just try to sell them tour packages. We must explain local things to them, such as how to keep safe during their stay here – for example, telling them how dangerous it can be to swim in the sea where there are red flags,” he added.

Miss Thitinan said that the decline in demand for tour guides makes it more important than ever to act sincerely when taking care of foreign visitors.