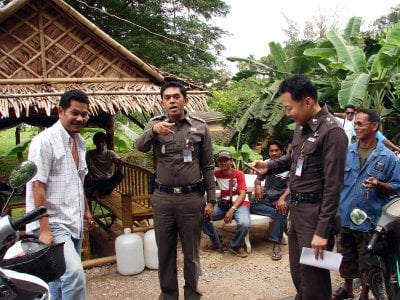 PHUKET: A taxi drivers co-operative will be allowed to operate a stand just outside the Westin Siray Bay Resort in Phuket, but only under certain conditions hammered out during a meeting with hotel management last week.

Local taxi co-operative Sirae Island Taxi Service earlier petitioned the hotel management to allow them to operate a stand at the luxury hotel, which opened at the start of August.

The drivers said resort guests were unaware of their services because they weren’t visible from inside resort grounds.

Taxi access to the resort was restricted to vehicles operated by Hello Phuket, which has an agreement with the resort. For our previous report click here.

During that meeting, the hotel representatives agreed to let the co-op operate a stand at the resort, but only if they promised not to stage protests, block Hello Phuket vehicles from accessing the resort or cause any other disturbances to resort operations.

The Westin Siray Bay Resort in return agreed not to allow in any other taxi operators, except for Hello Phuket.

Other conditions agreed to by the co-op were that the stand will be operated by a single English-speaking representative from 9am to 9pm.

No co-op vehicles will be allowed into the resort parking lot. They must remain parked no closer than 200 meters from the main entrance until called for.

Taxi stand manager Praderm Klomsuwan said, “We would like to say thank you for giving us this opportunity. We have already signed the contract, collected the relevant paperwork of members and submitted it to the resort to keep on record.

“Next, we will begin installing the taxi stand, which should be ready within two weeks,” he added.