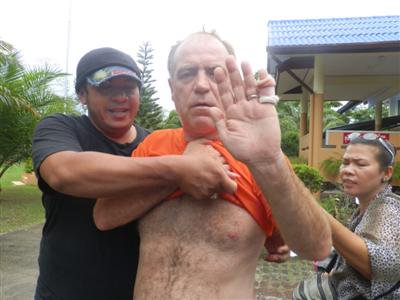 PHUKET: Phuket police are investigating the case of an Australian tourist who claims to have been beaten by a gang of twelve Thai youths today.

Thalang police were notified at 12:30pm that a foreign tourist was receiving treatment at the Srisoonthorn Public Health Station for a variety of minor lacerations and abrasions to the abdomen, back, right inner forearm and little finger.

The man was brought to the health station by 40-year-old Chaiyut Rasami, who was on his way home by motorcycle and stopped when he noticed the Aussie shirtless and trembling by the side of the road.

The man said he had been beaten by a group of 12 youths. Feeling sorry for him, but doubting that the wounds matched those of a mass beating, Mr Chaiyut lent him a shirt and took him to the nearby Srisoonthorn Health Station.

At the health station, the Australian continued to repeat in a trembling voice a single sentence: that his wounds were inflicted by a gang of 12 youths.

He said little else that staff could understand, but wrote down his name as Peter William, age 47. He was unable to tell workers there where he was staying.

A rescue worker told the Gazette the Australian was seen by police wandering behind Thalang Hospital the night before in what appeared to be an agitated, possibly drug-induced state.

As medical staff at the center treated his wounds, Phuket Tourist Police were called in to investigate his claims.

Aussie tourist airlifted to Bangkok after fall from Phuket tuk-tuk