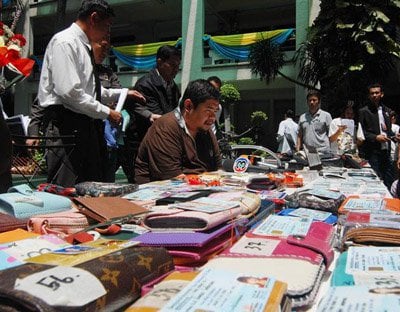 PHUKET: A woman noticed a “suicidal man” on a Web board, felt his pain and decided to reach out with a caring heart.

While the man soon said she had become the light of his life, the truth was that he had told many women the same thing and viewed them all as his victims.

“He has committed more than 100 crimes during the past three years,” Metropolitan Police commissioner Lt-General Kamronwit Toopkrajang said yesterday.

One of the victims of suspect Chakorn “Ome” Boonchern, aged 33, was so angry that she slapped him in the face at the Metropolitan Police Bureau yesterday.

“I can’t explain why I was so gullible. But I believe all of us would feel the same for another fellow human being when he said he was thinking about committing suicide,” the victim said, speaking on condition that her name was withheld.

“I offered words of encouragement and we began chatting online and on the phone,” she said. “After a week, he invited me to meet him and his parents, saying that he wanted to thank me in person.”

He described himself as a son of a famous politician and claimed his surname was “Thienthong”, she added. When they met, he told her to get a facial massage before meeting his parents, so that she had a “neat” look.

“He offered to carry my handbag for me. I didn’t suspect anything because he also put his wallet and cellphone in there,” she said. “But after I came out of the massage room, I found that he was gone.”

She headed straight to Lat Phrao police station to file a complaint and found that four other women had already lodged similar complaints.

Another victim said she had met Chakorn online in the same way and, at his insistence, agreed to meet him at a coffee shop in Bang Na district.

“He suggested that I get my hair washed and set before meeting his parents. I agreed, only to find out that he had run off with my bag [while I was being treated],” she said.

She said she hoped her case would serve to remind women not to fall victim to such a ruse because of a soft heart. “Don’t believe anyone too fast,” said the woman, who has since founded a Facebook page called “Hunt Down Ai Ome”. As of yesterday, the page had 2,866 “likes”.

Chakorn, who appeared stressed at yesterday’s press conference, said: “I plead guilty to all theft charges, but not to sexual assault. You can check the recordings from security cameras, all those women walked out of the rooms normally and some even held my hand.”

Chakorn said he had lived off his victims for the past three years, during which time he had also given his wife and their child 15,000 baht a month.

Maj-General Pisit Pisutsak, deputy commissioner of the Metropolitan Police, said Chakorn had regularly moved from one rented place to the next so as to avoid arrest and suspicion.

“We managed to track him down this time because he contacted a professional photographer who had just lost his camera on Saturday night. Chakorn claimed he would return the camera if he got a 30,000 baht reward,” Pisit said. “The photographer alerted the police.”