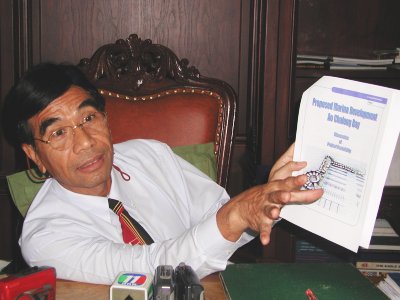 PHUKET CITY: Three proposals have been received by Phuket Governor Udomsak Usawarangkura for the construction of a large marina in Chalong Bay, to be financed by a mixture of government and private sector money.

One proposal is from a consortium headed locally by Lifestyle Properties Co Ltd and the Gazette understands that two other concepts have been submitted, one by an Australian consortium and one by a French group.

Lifestyle Properties Consultant Ken Abday was close-lipped about his company’s proposal. He told the Gazette, “Until it gets further along, I don’t want to comment. We explained our concept to the Governor, and we’ll see where it takes us.”

None of the plans has been made public, but the Gazette understands that the finished marina will be larger than Phuket’s three existing marinas combined, and will involve huge dredging works and the reclaiming of some 30 rai of land from the sea.

The announcement, made at a meeting on Tuesday, follows a previous one, on July 22 last year, that the Phuket Provincial Administration Organization (OrBorJor) was keen to pursue a joint public-private initiative to develop a new marina to support Phuket’s burgeoning marine industry.

In October of last year, Vice-Governor Niran Kalayanamit told the Gazette that Ian Davey, Commercial Consultant for the Australian Embassy in Thailand, had been brought in to assist the OrBorJor in finding a professional consultant to develop the master plan.

Commenting on the Lifestyle Properties submission, Gov Udomsak described the project as “…a win-win situation [that will] benefit the government, the private sector and the public [in Phuket]”.

He speculated that the project would cost ” …more than 1 billion baht”, and that the OrBoJor would contribute ” … between 30% and 40% of the total cost.”

He added that the public would be given an opportunity to comment on whichever proposal is selected by both the OrBorJor and central government, although he could not give the time frame for a decision being reached.

Phuket urged to turn out the lights