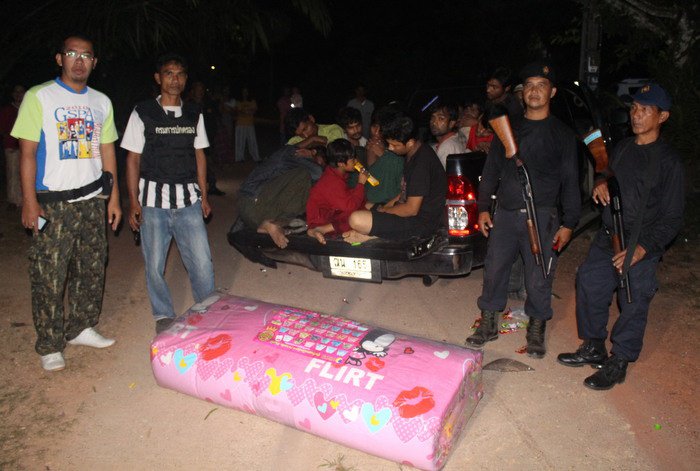 PHUKET: Police are hunting three human traffickers who evaded arrest as they attempted to smuggle more than 50 Rohingya, including six children, through Thailand to Malaysia early this morning.

The drivers loaded the refugees into three pick-up trucks in a rubber-tree plantation in Takuapa, north of Phuket, before attempting to evade police checkpoints on the main road.

“We received a report about the human traffickers planning to move people to Malaysia, so we called in a team of about 30 officers and laid in wait for the them to come through Baan Bang Kuk Nai, where we believed they would pass,” said Takuapa District chief Manit Pianthong.

At about 3:30am, the team was notified by spotters that the refugees were being loaded into the trucks, and heading toward the main road.

“When the drivers saw the checkpoint they attempted to flee. One truck slammed into my car and another vehicle before crashing into a utility pole, while the other two were driven into a nearby plantation,” Mr Manit said.

“All three drivers managed to abandon the vehicles and evade arrest. However, we are hunting them down now.”

A total of 50 Rohingya were taken into custody. However, officials believe others managed to escape into the plantation.

Tourism, martial law: Looking back at Phuket in 2014