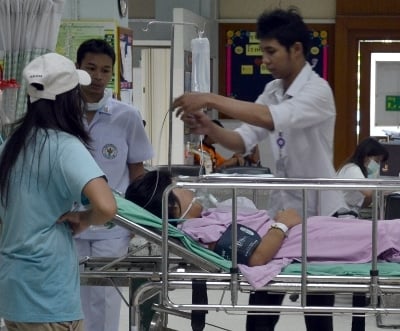 All three were on family trips to the beach, explained the mother of one of the girls.

“We were waiting for our somtam on the shore while the three girls went swimming.

“A few minutes later, I heard someone blowing a whistle and then I saw a foreigner running into the water with a board,” she said.

“I could see the girls waving for help. I think the current was pulling them away from the beach.

“My daughter swam back to shore by herself, but she was exhausted when she reached the beach,” she added.

Beach vendor Song Sa-ingthong, who is a former beach guard, told the Gazette, “I saw one of the [other] girls being brought ashore by two to three foreign tourists.

“The girl was unconscious. One of the foreigners shook her awake and she started vomiting,” he said.

The third girl was saved by a beach umbrella vendor who took a canoe out to rescue her, said Mr Song.

“My younger brother swam out behind him, but the girl was unconscious by the time they got there.

“My brother helped to get her into the canoe and they performed CPR while they were still out there,” he added.

All three were rushed to Vachira Phuket Hospital in Phuket Town, where they were admitted to the emergency ward.

One of the two girls rescued was still experiencing chest pains, the mother said.

As of yesterday evening the three girls were all in safe condition, but still needed to undergo x-rays and further examinations to determine whether they had suffered any complications, the mother added.

“I think the current dragged them away from the beach and it was too difficult for the girls to swim back to shore,” he said.

“Children should not be left swimming alone without an adult watching over them because some children may not know how to swim safely,” Mr Song added.