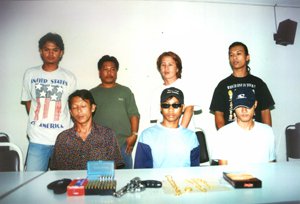 PHUKET TOWN: Thanks to a combination of sheer good luck and one officer’s good memory, police have arrested Taweewut Saeton, 31, and two minors aged 15 and 16 in connection with the rape and murder on Saturday of Pranorm Anuan, 24, the owner of the Shark Otto Bar in Soi Eric, Patong. Taweewut and one of the minors are from Phuket, while the other minor is from Ranong. The three were arrested in a house near Phuket Country Home in Chalong, where police found two gold necklaces, a .38-caliber handgun with 95 bullets, a motorbike and 3,000 baht in cash. Pol Lt Sommai Oncom, of Phuket Town Police Station, who was following up on an unrelated crime, went to the house intending to arrest someone else who, he discovered, no longer lived there. Once there, however, he recognized the names of the three at the house, who were wanted by the police for a robbery in Moo Baan Jomtong on Kwang Rd. The two minors, he also knew, were wanted for questioning after being filmed by a security camera while selling K. Pranorm’s necklace at the Kittiporn gold shop in Phuket Town. The shop is opposite the Pearl Hotel on Montri Rd. While being questioned at Phuket Town police station, the three confessed to being involved in the rape and murder of K. Pranorm, as well as 15 other crimes. The two minors told police that, early on Saturday morning, they were riding around on a motorbike looking for a victim to rob. K. Pranorm rode past and they noticed that she had a bag with her that was likely to contain cash. They gave chase and forced her off the road on Luang Pho Wat Chalong Rd, near the Phuket Bus Station. They then forced her at gunpoint to ride to an old tin mine north of the Tesco-Lotus Superstore. One of the minors admitted to robbing and raping her, and to shooting her. An autopsy performed at Wachira Phuket Hospital revealed that Pranorm had been shot in the back of the head, a fact originally missed by investigating officers due to the extent of her injuries. Taweewut, who lived in the same house as the minors, was charged with being an accessory to murder and receiving stolen goods. One of the minors was charged with robbery, rape and murder, while the other minor was charged with robbery and being an accessory to murder. The trio are expected to be charged with additional offenses as the investigation proceeds.