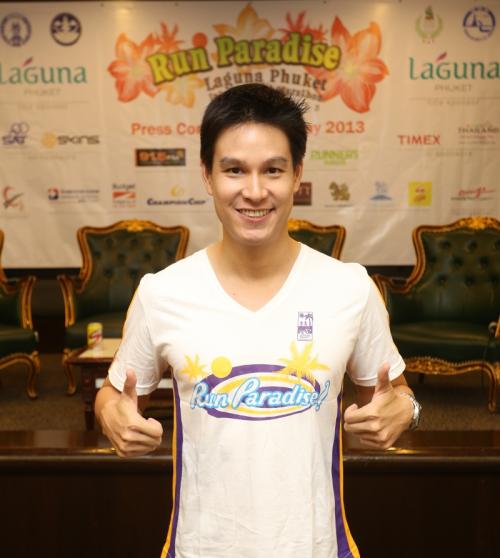 PHUKET: Runners and walkers of all ages and abilities will take to the roads of Phuket on Sunday morning when the eighth annual “Run Paradise” Laguna Phuket International Marathon (LPIM) once again celebrates the joy of running and pursuit of fitness in a family-friendly carnival atmosphere.

This year the line-up of more than 4,000 Thai and international participants from 45 countries – aged from 13 to over 80 years-old – will set off on a variety of distance courses to the inspiring sound of LPIM’s specially commissioned “Run Paradise” theme song. Competitors will be led by LPIM’s Charity Ambassador TV actor Krittapas ‘Kritt’ Sakdidtanon on the half marathon course, they’ll all be aiming to help raise 1 million baht for Laguna Phuket Foundation’s latest ‘Run for Our Kids’ initiative to support its various Developing Sustainable Schools programs in Phuket and neighboring provinces.

With a full 42k marathon starting at 4.30 am; 21k half marathon; 10.5k run; 5k 91.5FM Community Walk and 2K children’s run, LPIM offers something for everyone – with scenic courses winding through the picturesque Laguna Phuket resort and further afield past rubber plantations, alongside beaches and through local villages.

The honor of oldest LPIM competitor this year goes to 84 years-old Thai female Chanita Kumarvut in the 10.5k run.

Also in the full marathon is 63 year-old British company director Dougie Tobutt, who has completed 120 marathons in nearly 50 countries – while 27 year-old fellow Brit, financial adviser Kate Jayden, will be running the 42k during her honeymoon. LPIM will be her 37th marathon – her 22nd in 2013 and 33rd in the space of 12 months.

2012 Champion Danchai “Dan” Prangkong, aged 30, of Surat Thani returns to defend his full marathon title which he won in a time of 2:49:33 last year.

Thailand has the oldest and youngest competitors in the half marathon, with 18 year-old Seksan Khakhuen and Nattanan Pramuanpornsatid, the youngest male and female alongside oldest male, 77 year-old Jaran Kaphueng and oldest female, Tae White, aged 64.

Also in the half marathon is 63 year-old Glenn Feagle of the USA – who has competed in every LPIM – making his eighth start at the event.

Laguna Phuket itself is also well represented with more than 360 staff members taking part, including most hotel general managers.

“We love the way that this event brings runners of all ages from around the world here to enjoy our beautiful environment and to compete together with our local community, Laguna staff and running clubs from all over Thailand,” said Debbie Dionysius, Laguna Phuket Assistant Vice President of Destination Marketing.

“Around Laguna we see our dedicated colleagues and local residents running every day during the weeks leading up to this weekend, and Phuket as a whole seems to truly enjoy the marathon buzz that’s created every May and June.

“This year we’ve ramped up that buzz with our own ‘Run Paradise’ marathon theme song, which we hope will inspire all our runners to enjoy the whole event and achieve even more.”

Although LPIM is firmly focused on the fun of running, serious full marathon contenders will have their sights set on cracking the course record of 02:33:51, set in 2011 by Russian whirlwind Vsevelod Khudyakov.

But with most content to enjoy running in a tropical paradise, there’s a special chance to relax and celebrate achievements in style after the race – at a “Post-Marathon Chill-Out” pool party staged at Angsana Laguna Phuket’s stylish XANA Beach Club.

Scheduled from 1.00-6.00pm with free admission to all, the party will feature a seafood BBQ buffet for 950 baht nett per person, including a glass of house wine, a Singha beer or a soft drink.

Entertainment will be provided by top UK DJ Jeremy Healy and Phuket’s DJ Nemo Cools, who will play chilled-out beats by the pool to help runners and supporters unwind.

Last minute race registrations are available in the Marathon Expo at the Y-Junction site close to the entrance of Outrigger Laguna Phuket Beach Resort on Friday June 7 from 1pm-6pm and on Saturday June 8 from 10am-5pm. Registrations for the 91.5FM Community Walk are available right up until 7.30am on Sunday morning before the start at 8am.