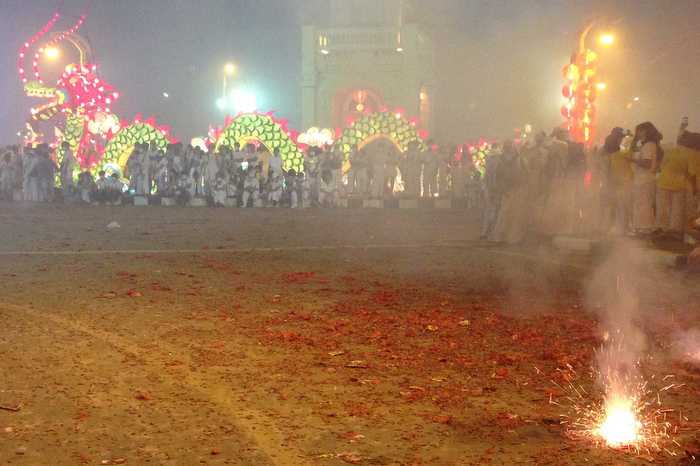 PHUKET: Thousands of people celebrated the end of the Phuket Vegetarian Festival last night, packing the streets as processions from each of the island’s shrines made their way to Saphan Hin for the midnight finale.

Each of the Chinese shrine processions carried images of the Jade Emperor and the Nine Emperor Gods on palanquins as firecrackers blazed a pathway for the esteemed spirits, warding off demons along the way.

The massive number of firecrackers set off during the festivities shrouded Phuket Town in a fog-like haze that stretched all way to Saphan Hin.

Festivities culminated in a huge bonfire, set ablaze to send the Chinese gods on their annual journey heavenwards.

Devotees then turned hungrily to the hundreds of stalls that stayed open late with non-vegetarian fare, devouring various meat-laden dishes in a banquet that marked the official end of their nine-day vegan diet.

As is tradition, the go-teng poles at each shrine – used by the gods each year to descend to earth and then return to heaven – will be lowered at 3pm today.

The nine festival lamps will then be removed, marking the end of the festival.

Because there are two ninth lunar months in the calendar this year – a phenomenon which only happens every 100 years – Phuket will hold a second vegetarian festival at selected shrines from October 24 to November 1 (story here).

An official schedule for the second Vegetarian Festival has yet to be released, but several shrines on the island will honor the festival with a second round of commemorations (story here).