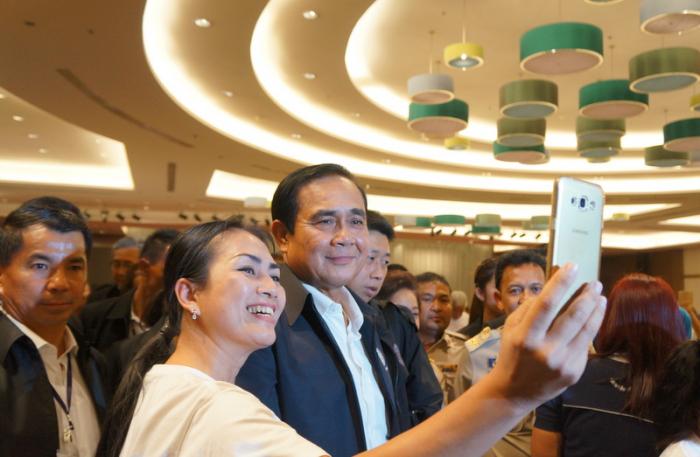 PHUKET: Prime Minister Gen Prayuth Chan-o-cha was greeted by thousands of fans during his one-day trip to Phuket on Friday, during which he committed that his government would support mega projects on the island.

PM Prayuth chaired the opening ceremony of the new terminal at Phuket International Airport (story here) and then headed to Patong to inaugurate ‘Startup Thailand’ and ‘Digital Thailand’ (story here).

In the afternoon, Phuketians had a chance to meet him in person at Phuket Rajabhat University where PM Prayuth was welcomed by a choir of students from Phuket Kindergarten, who performed before thousands of locals and government officials packed inside the university convention hall.

“Phuket is the biggest island in the country, known worldwide for its beautiful nature and culture. Millions of tourists visited the island last year, contributing more than 320 billion baht to the economy. We are thankful for the government’s support toward Phuket. We have been approved to receive more than 3.3 trillion baht to improve facilities in order to support the increasing number of tourists, something we had never received to such an extent before,” said Governor Chamroen.

“Phuket has also been named as a model province for the pilot ‘Pracharath Rak Samakkee’ project (story here), as well as for the smart city project. However, there are other projects needed by Phuket people, for which we would like to ask for the government’s support. These include the light rail project, the new road from the airport to town, a Phuket International Convention and Exhibition Center in Mai Khao, the Patong tunnel, as well as an alternative route between Patong, Chalong and Pa Khlok,” Gov Chamroen added.

“Once again, we are thankful for this visit from the cabinet.”

PM Prayuth acknowledged the governor’s comments and added that he wanted Thai people to be forward-thinking in order to progress.

“Thank you for the warm welcome. I was last here as the commander of the Royal Thai Army. However, back then people did not love me as much as they do today, because I was too strict in law enforcement. Today, I am here to support the development of our nation,” said PM Prayuth.

“I want to see Thai people looking toward the future. If you want it to happen, it will,” he added.