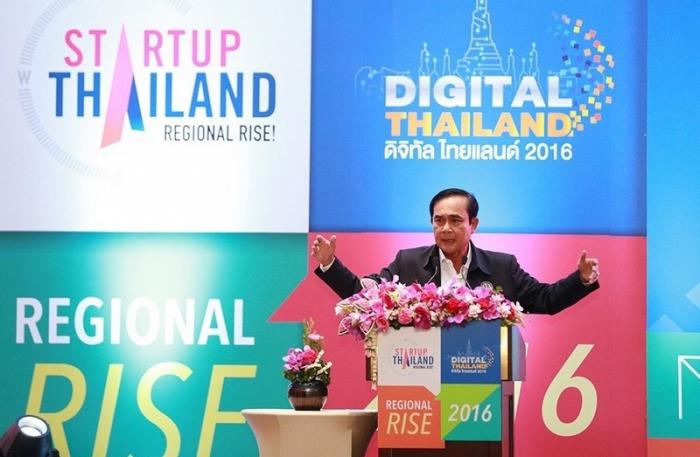 The regional launch of this nationwide initiative is aimed at helping budding local businesses to get off the ground and into the international arena of digital commerce.

The Startup Thailand 2016 campaign was launched by the prime minister in Bangkok back in April, as a joint government and private sector collaboration between 11 agencies to bring businesses up to date with contemporary international commercial practices and trends (story here).

The Prime Minister also spoke of ‘Phuket as a Smart City & Startup Paradise’.

“Startup Thailand is one of our programs to boost the Thai economy through creativity and Information Technology. Phuket has a lot of potential – last year 13.2 million tourists (of which 9.5 million were foreigners) contributed more than 313,300 million baht” to the Thai economy, said PM Prayuth.

“This initiative will help Phuket – especially new and creative businesses – to grow even more,” he added.

About 2,000 new businesses were launched around the country in the past year. Organizers of ‘Startup Thailand’ are hoping to help many more get access to information and technology to push the country as an Asean hub of digital innovation.

Another goal of the initiative is to bring together talented people from a variety of different start-up companies from a broad spectrum of product and service sectors.

“We are glad the government has given importance to this project,” said Dr. Pichet. “This is a successful continuation of ‘Startup Thailand’ and ‘Digital Thailand’ from Bangkok, Chiang Mai, and Khon Kaen.”

The launch of Startup Thailand in Chiang Mai showed great potential and business creativity under the slogan ‘Creative Valley’, with 4,500 people joining the event. Khon Kaen is working under the slogan ‘Mekong Connect’. This is aimed at boosting cross border business with CLMVT countries (Cambodia, Laos, Malaysia, Vietnam and Thailand). More than 7,300 people joined the event, the highlight of which was ‘Smart Farmer and Industry 4.0’.