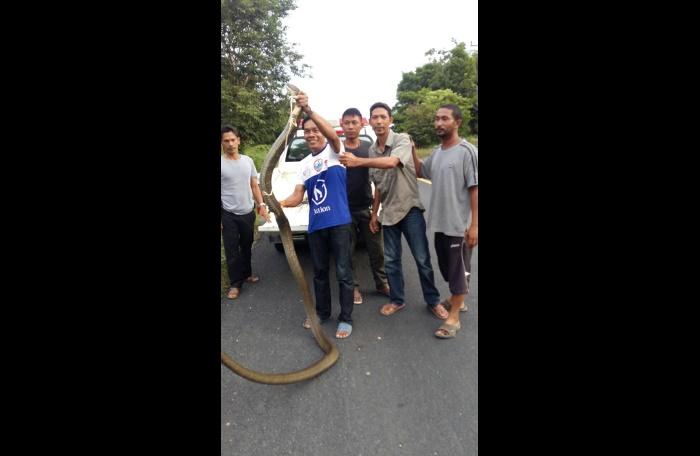 Worawut Longasun says he has trained himself to capture snakes by watching videos on television and YouTube.

The snake was found in the storage area of Aree Wansuk’s house by her daughter who spotted the reptile’s tail while playing with her friends nearby.

“My daughter ran up to me and insisted that she saw a black snake in the storage area,” said Ms Aree.

“I didn’t know what kind of snake it was, so I called on the village headman for help. He then notified Mr Worawut, our village’s snake catcher.”

Mr Worawut, cheered on by a crowd of villagers, captured the snake within ten minutes and released it in a forest about a kilometer away.

“I think it lived about 50 meters from Ms Aree’s house in the Thung Ngiw Hills and may have slithered out in search of food. We took measurements – it was about five meters long and weighed 35 kilograms,” said Mr Worawut.

“We have found a lot of snakes during the monsoon season. I have caught more than 20 snakes this year alone. Even though it’s dangerous, I’m glad to be of service to help my fellow villagers,” he added.

Mr Worawut also caught a 30kg king cobra in March (story here), but it could not be confirmed whether it was the same snake (who may have gained 5kg in five months).