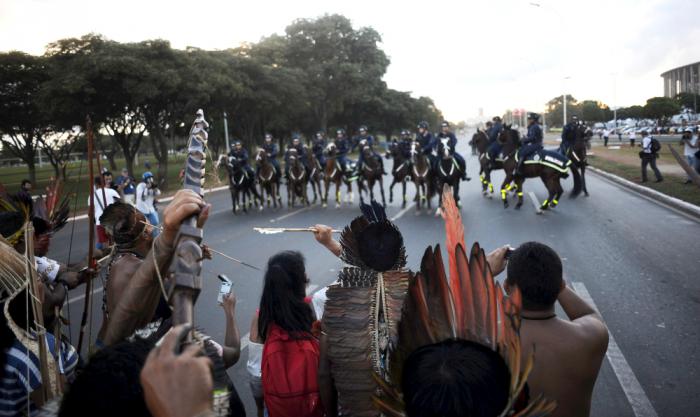 PHUKET: Police fired tear gas canisters to contain anti-World Cup demonstrators who tried to march to the Brasilia stadium where the football tournament’s trophy was on public display on Tuesday.

The protest by more than 1,000 people snarled rush hour traffic in the Brazilian capital adjacent to the Mané Garrincha National Stadium, the most costly stadium built for the 32-nation sports event that begins in 16 days.

Adding to the tension, Indians in traditional tribal dress with bows drawn joined the protesters from the Homeless Worker’s movement. The group says building stadiums to host the World Cup was too costly, caused real estate prices to soar and forced lower-income families out of their homes.

Brazil is rushing to finish stadiums and urban transport systems in time for the World Cup in a climate of growing civil disobedience by groups of Brazilians who seek to disrupt the event saying its cost was excessive for a developing nation.

The World Cup now serves as a backdrop to push for a variety of causes, and bus drivers in Rio de Janeiro said on Tuesday they would start a 24-hour strike at midnight, while professors marched down Sao Paulo’s main thruway to demand a raise.

Local football fans lined up outside the Brasilia stadium to see the FIFA World Cup Trophy, which is touring the 12 cities hosting the games, but the protest march forced authorities to cancel the trophy display and close the stadium.

The Brasilia protest follows a peaceful march led by the same group in Sao Paulo last week. That protest of several thousand held up traffic in South America’s business hub and spurred fears that more protests and even violence could disrupt the month-long World Cup when it starts on June 12.

A spokesman for the military police said Tuesday’s protest started peacefully and that police were trying to contain the march with tear gas and walls of shield-bearing police. But if the demonstrators reached the stadium, they would have to intervene, the spokesman said.

Though they have not previously joined anti-World Cup protests, Indians have routinely protested in Brasilia against efforts to change the rules around how Indian reservations boundaries are determined. They invaded Congress while it was in session on several occasions last year.

Brazil’s President Dilma Rousseff has promised the Homeless Worker’s movement that squatters who have gathered around some of the stadiums will receive low-cost government housing. But her government has warned that it will call in troops if necessary to prevent protests disrupting the football games.

Some 600,000 foreign football fans are expected to travel to Brazil for the World Cup.