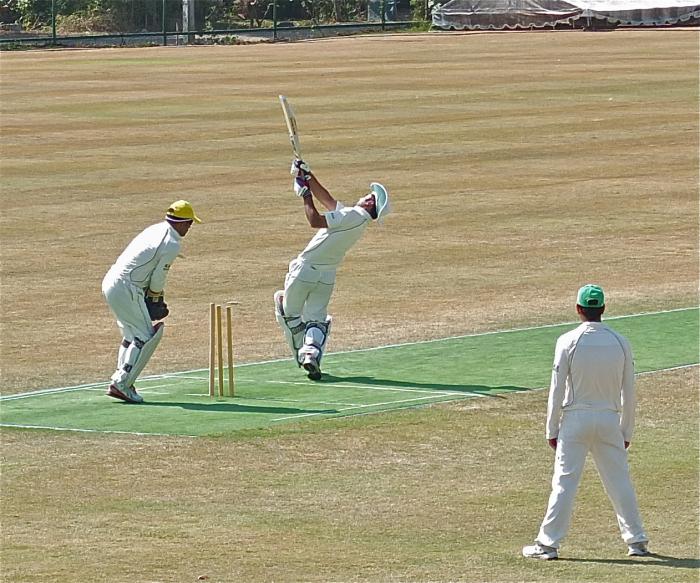 In their first encounter of the season on February 9th. ICC set the record for the lowest team total on the ACG of just 37 runs. Winning the toss this time around. ICC’s captain, Anand Chand, choose to bat first on a pitch with some damp patches from an overnight shower.

The pitch wasn’t to blame for the running mix up on the third ball of the morning that saw the end of their top batsman Chand without facing a ball. Simon Wetherell of Thalang pounced on the ball hit to mid-on and fired it straight over the stumps to see the back of Chand.

ICC were 7-2 in the 4th over and this time it was a mix up of sorts for the Thalang team with two players colliding during the catch but the ball was safely in the wicket keepers gloves.

Iqbal Malik (35 runs from 38 balls) was a bright light for ICC despite not getting full value for his shots from the lush ACG outfield. He helped ICC along to 49-3 at the first drinks break before Craig Murphy (2-14) bowled Malik in the 15th over to take the wind out of the ICC sails.

During the next 11 overs, Thalang’s bowlers slowed down the scoring rate and snared another five wickets for just 31 runs. Umpire John King placed his lunch order for one of the delicious tuna sandwich’s from the Boundary Bar when he saw last batsman, Paresh Borkar, come out to join Saleam in the middle.

Saleam didn’t have lunch on his mind as he manipulated the strike, entertained the crowd with his hitting, and more importantly took ICC from 87-9 to a competitive 143 runs from 34.3 overs. Saleam scored 53 runs off just 43 balls including 8 fours and a six before he was eventually caught behind off the bowling of Andrew McMillan who chimed in with 4-37 from 5.3 overs.

With just five more matches to be played before the finals and all the teams still in with a chance of lifting the JLL league trophy, there were plenty of spectators at the ground with vested interests in the result.

Requiring 144 runs for victory from 35 overs, Paresh Borkar of ICC struck with the new ball on the fifth ball of the innings. A. Saleam, still on a high after his half century, opened up from the other end and had an immediate impact. He bowled experienced batsman Craig Murphy with his first ball and Thalang had lost 2 wickets from just seven balls.

Simon Wetherell dug out another fast full pitched delivery from Saleam and then went about building a partnership with Bill Stahmer. The two Thalang batsmen took the score to 84-2 at the first drinks break. They were helped along by 11 byes from the ICC wicket keeper Shah Ullah and from four legs byes scored from a rare free hit opportunity.

The partnership was broken soon after the break with Stahmer seemingly playing a nice shot but being adjudged LBW for a well compiled 32 runs. Wetherell, who scored 35 well compiled runs, gave up his wicket while searching for a quick finish to the match and an extra bonus point.

The leagues luckiest man and highest run scorer, Justin Thomatos, then walked out to the crease and his spree of good luck continued. Any chance of ICC getting a much needed win was lost when bowler Syed Hussain over-stepped the line and gifted Thomatos a free hit that he dispatched to the boundary.

The final result may have been a given at this stage but there was still time for some controversy when Paresh Borkar cleaned bowled Thomatos only to have the square leg umpire call a no-ball for the ICC having three fieldsmen behind square leg. Fresh from representing Phuket in the National Games in Srisaket, Thai teenager Paan, fittingly hit the winning runs for Thalang in the 23rd over.

Thomatos finished on 30 not out from 23 balls as Thalang picked up yet another bonus point to extend their lead over Laguna to four points in the JLL league championship.

This Sunday, March 30th at 10am, top of the ladder team Thalang play the undefeated Laguna outfit at the ACG.