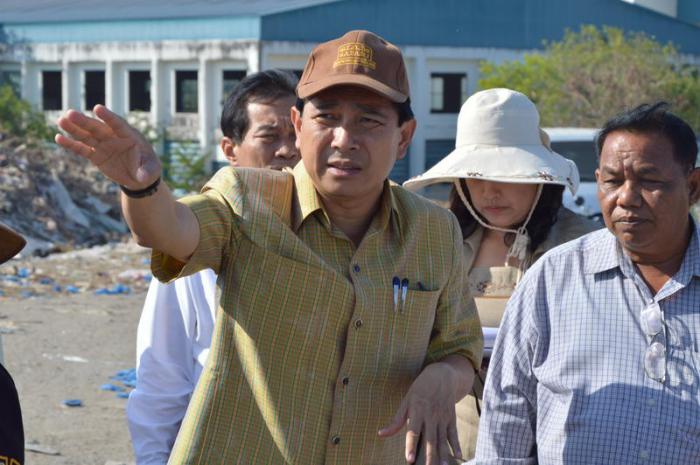 PHUKET: Island officials yesterday visited Phuket’s overloaded waste management facility and took steps to ensure that any fire there could be quickly contained.

The inspection followed the news of a blaze that erupted in a garbage disposal site in Samut Prakan province on March 16 (story here) and adversely affected many locals in the area.

“I have asked Prachum Suriya, chief of Phuket City Municipality Environment Office, to keep a backhoe on standby. If a fire does start, workers can immediately begin to move trash away from the burning area and prevent the flames from spreading,” said Phuket Governor Maitri Inthusut.

Governor Maitri, joined by Phuket City Mayor Somjai Suwansupana, also addressed the steady increase in volume of garbage on the island, as well as the overflowing landfills and incinerators struggling to keep up.

“The amount of garbage on Phuket has increased by an average of 7.9 per cent per year over the last 15 years. Last year, the growth rate was 9.8 per cent,” Governor Maitri said.

All five of Phuket’s landfills, which can hold 369,322 tonnnes of rubbish, are full. Two no longer receive trash, but three, despite being full, continue to take garbage.

“Ideally, we cut down on trash going to the landfills by burning it. When all three incinerators are working, they can burn a total of 950 tonnes per day,” explained Gov Maitri.

Currently, two incinerators are broken, which means only 350 tonnes of the 700 tonnes of garbage delivered daily to the facility can be burned.

On Friday, one of the broken incinerators will be back in operation, the governor said, and the two together will be capable of burning 700 tonnes of garbage a day.

The governor also plans to ask for 530 million baht from the fiscal budget to repair the third incinerator, which is capable of burning 250 tonnes per day. It has been broken since 2012 (story here).

Thalang triumph over ICC at ACG