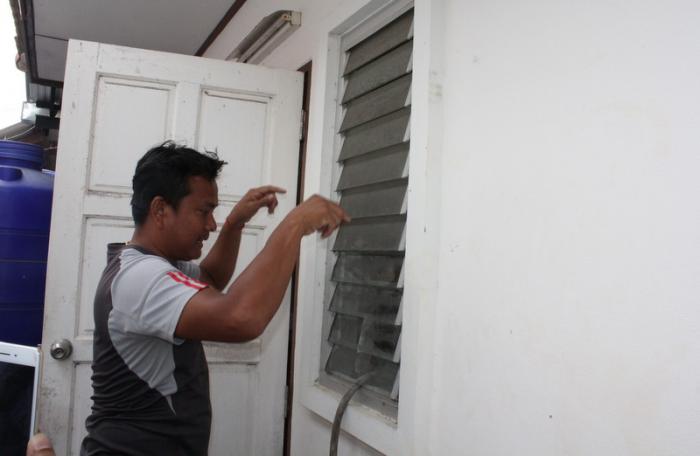 PHUKET: Thalang locals are urging police to investigate a spate of robberies that reportedly took place on several occasions last month in their area.

The inhabitants of Moon Baan Phanason Park Ville 3 in Srisoonthorn yesterday appealed to officials to attend to the matter, claiming that cash from over ten houses had already been stolen and asked why the burglars had been allowed to run loose all this time. They also shared details of the incidents on social media.

A house owner named Suravee Rattanasawitree, 36, shared her story with the Phuket Gazette.

“My husband heard some unusual noises from one of the rooms in the house, so we went into the bedroom to take a look. To our shock, we saw a man ransacking our room, but we could not see his face clearly. When he saw us enter, he immediately jumped out of the window, climbed down the wall and escaped on his motorbike. We believed that he climbed up the wall and used a shovel to break the window,” said Ms Suravee.

“We called police to come and check for evidence, such as fingerprints, but nobody came. However, we kept the evidence anyway, in case it could be useful later,” she added.

“A burglar broke the louver behind my house and stole a wallet containing about 6,000 baht. He did not touch other valuables such as iPhone and iPad, focusing solely on cash – perhaps he was afraid of getting tracked,” said Mr Sanya.

“I filed a complaint as well, but nobody came to check the house for evidence,” he added.

Several other residents reported similar incidents with the same ‘style’ of burglary.

“We request police to please take action before the thieves strike again. We also request the project owners to set up CCTV cameras, so that it is easy for police to track suspects in future incidents,” said Mr Sanya.

“We have sent officers to keep an eye on the area. I believe we will apprehend the suspects soon. We request all parties with evidence to step forward and file complaints with police, so we can continue our investigation,” said Maj Gen Teeraphol.