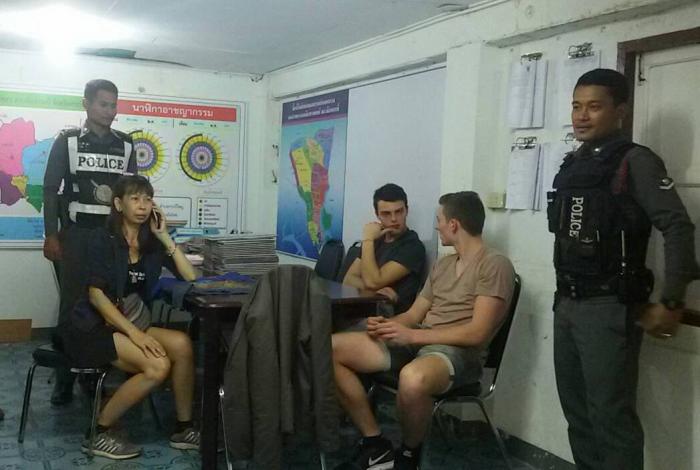 KRABI: Two Italian tourists were arrested on Sunday after CCTV footage showing them disrespecting the Thai flag and damaging public property in Krabi emerged on social media the day before.

The video shows the men – named Ian Gerstgrasser and Tobias Gamper – pulling down the flags and dragging them on the ground.

The footage has been shared thousands of times on Facebook, with several commentators demanding immediate punishments for both men, saying they had disrespected the Kingdom and should be held accountable. Comments also included veiled threats, warning the men to ‘be careful on the streets of Thailand’.

Following their arrest, both men apologized to the police and public, claiming that they were drunk and not in control of their actions.

Both men have been charged with property damage, as well as damaging and disrespecting the national flag, confirmed Lt Kunsawai Kunno of Krabi City Police.

The Thai Flag Act stipulates a six-month prison term and a 1,000-baht fine for such actions. Thai criminal law states that anyone found guilty of desecrating flags or state symbols is subject to a jail term not exceeding two years, a fine up to 4,000 baht, or both.