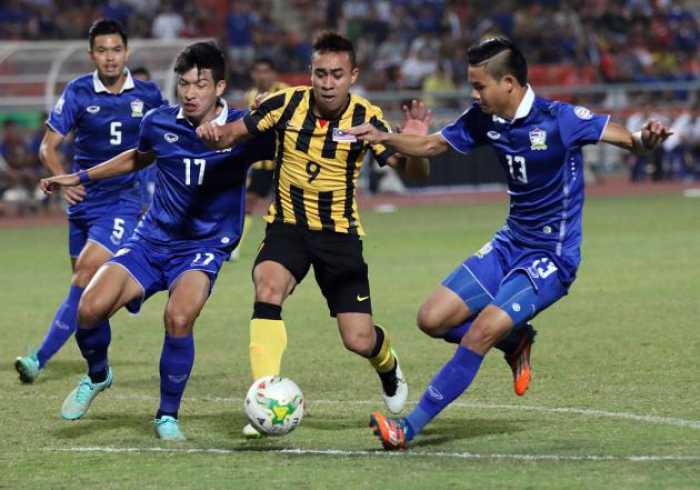 PHUKET: Thailand struck two late goals, including a penalty, to snatch a 2-0 first-leg home win over Malaysia in the Suzuki Cup final last night which was just reward for their relentless pressure in an action-packed game.

They broke the deadlock with 18 minutes remaining when Charyl Chappuis converted a spot kick before Kroekrit Taweekarn sealed the victory with a cool finish four minutes from time.

Thailand coach Kiatisuk Senamuang said Malaysia were tricky opponents and his team would have to be at their best for the second leg which will be played at the packed and imposing Bukit Jalil stadium in Kuala Lumpur on Saturday.

“There’ll be 80,000 or 100,000 people in Bukit Jalil and we’ll be the ones under pressure,” he told reporters. “We’ve shown the fans how exciting we can play. We will show them again at Bukit Jalil.”

Malaysia coach Dollah Salleh added: “Thailand played better than us today. Our back line, especially, collapsed after the 70th minute, but we have 90 more minutes to play. It’s not easy, 2-0, but in football anything can happen.”

Thailand were always in control in an action-packed first half, dangerous on the break but nervous in front of goal, with Mongkol Thosakrai blasting over the bar after four minutes and Kroekrit finding the side netting moments later.

Malaysia rode out the storm and created several chances of their own on the counter-attack with Mohamed Amri Bin Yahyah a constant menace for the shaky Thai defence.

Thailand almost went ahead near the break, when Adisak Kraisorn got the better of the Malaysia defence but his spiralling effort was pushed wide of the post by goalkeeper Mohamed Farizal Bin Marlias.

The Thais piled on the pressure in the second half at the Rajamangala Stadium but squandered three clear chances in as many minutes, with Prakit Deeprom, Adisak and Charyl all in space but driving the ball wide or over the bar.

They finally got their break after 72 minutes when Adisak was pulled down and Charyl stepped up to convert the penalty.

Kroekrit doubled the advantage in the dying moments, latching on to Chanathip Songkrasin’s cross inside the area to edge closer to their fourth title in the Southeast Asian contest and leave Malaysia with a mountain to climb in the second leg.

Football frenzy swept across Bangkok yesterday when Thai fans from all walks of life turned out in droves to get behind the national team, as they bid to reclaim the Asean Championship title that has eluded them for more than a decade.

Public interest in the Thai football team had subsided following years of underachievement, but there have been signs of a revival of interest since September following the strong display by the national under-23 side at the Incheon Asian Games.

The success in South Korea, where the Thais equalled their best result in the event by finishing in fourth spot, brought back some of the feel-good factor around the national team, before their sparkling performances in the group stage of the Asian Championship sparked a dramatic surge of interest in the public.

The whole country has been gripped by football fever since Thailand won all three of their group matches, which took place in Singapore last month, to qualify for the semi-finals as Group B winners.

The hype was there for all to see when supporters flocked into Rajamangala National Stadium last Wednesday to see Thailand claim a 3-0 second-leg win over the Philippines, a result which set up a title showdown with Malaysia.

With only 2010 winners Malaysia standing between the Kingdom and the title, the buzz surrounding coach Kiatisak Senamuang’s team was only going to get more intense.

Tickets for the first leg of the final at Rajamangala were snapped up by fans less than an hour after they were put on sale last Friday.

Despite the Malaysia fixture being announced as a sell-out, hundreds of fans arrived at the venue in the morning yesterday in the hope of getting tickets, as it had been rumoured that the remaining tickets from those allocated for away supporters would be put up for sale.

Meanwhile, scores of fans queued in a long line at the Grand Sport Hua Mark store to buy the national team’s replica shirts.

Given the high demand for tickets, touting was inevitably rampant, with one tout posting a photo of tickets with the caption “Each priced at 1,000 baht – No negotiation”, which was almost three times higher than the face value of 350 baht.

At the venue, a group of supporters held up signs with anti-touting slogans, one reading “Don’t tease Thai fans’ faith”, while a man was arrested and fined Bt1,000 by the police for touting tickets. He was later released.

Security was tight at the stadium, where officials were more diligent about checking fans after the Philippines match was marred by fans associated with a group called “Ultras Thailand” lighting flares – a practice banned by the regional governing body, the Asean Football Federation.

Fans waited in a long queue several hours before the gates were opened ahead of the 7pm kickoff. By the time the game started, the stadium was already full of expectant supporters, in scenes reminiscent of the Thai team’s heyday in the 90s.