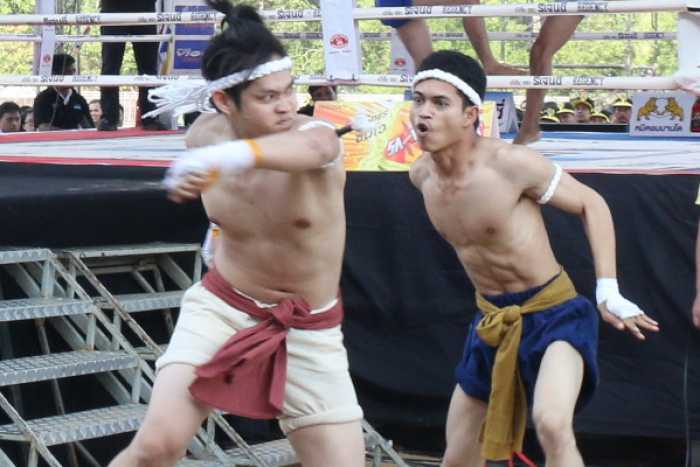 PHUKET: Thais dominated the Kard Chuek Original boxing event at Saphan Hin on December 25, winning eight of the 10 fights against their international rivals – no less than seven of them by knockout.

Only one fight was decided on points, with Petcheak Lookporkhun defeating Saliman Sing-Patong of Algeria in the opening bout.

To get the event underway at 4pm, fighters performed a demonstration of muay khat chueak – the ancient form of Thai boxing in which fighters tie rope around their fists – for the crowd and the guests of honor.

Joining the hundreds who turned out for the event were Phuket Governor Nisit Jansomwong; Narae Laovichaya, deputy permanent secretary of the Ministry of Tourism and Sports and Rear Admiral Teansiri Montriwade, deputy commander of the Royal Thai Navy Third Area Command in Phuket.

The 10 listed fights of Thai boxers against international challengers were televised nationwide on Channel 5 and broadcast to 170 countries via the Thai Global Network (TGN).

Eight of the 10 fights on the event card took place with boxers’ fists bound in muay khat chueak style, while two fights on the night (1 and 7) were fought modern style with gloves.

Before the listed fights began, the only women’s fight – and the only fight between two Thai nationals – on the night was held, with Hongyoklek Liangprasert defeating Porntip Thanakorn.

Then, after Petcheak’s victory on points, the knockouts began.

Famongkol Liangprasert dropped Sui Si Ong of Myanmar in the third round, then Robert Masod Muaythai followed suit, knocking out Enes Sing Patong of Morocco in round 3 of their fight.

Teerapong Korkiatwit joined the club, knocking out Leo Sibsam Rian of Kenya in round 3, before Oliver Sing Patong of Algeria turned the tables and knocked out Petch-tae Lookporkhun in their fight’s first round.

Phuthai NS Sport returned the compliment, knocking out Kwoy Thu Yangon of Myanmar within seconds in the opening round of fight 6 on the card.

Superboy W. Wittayanarupol, however, lost his battle against Arthur Sing Patong of Cambodia, falling to a knockout loss in the fourth round.

Fight 8 saw Paisrithong Kiatprapat take on So Win Liam Paang of Myanmar, with Paisrithong declared victorious by knockout in round 2.

To close the night, Resort Liangprasert knocked out Sor Ju Jor Paang of Myanmar, also in round 3.

“I am not really a big fan of muaythai, but these fights held all of my attention. I couldn’t leave my seat from the first fight until the final round,” Governor Nisit told the Phuket Gazette.

“I am glad that Phuket had the chance to hold such an exciting event to preserve the art of traditional Thai fighting and to support Phuket tourism. Thank you everyone for making this happen.”

Governor Nisit recognized the important contribution muaythai makes to Phuket’s tourism industry as an attraction that attracts many people for longer stays on the island.

“There are at least four stadiums and 45 Thai boxing camps in Phuket,” he said. “Many tourists attend muaythai classes at these camps, and one muaythai course can take months. That brings us millions of baht to Phuket in income.

“These fights tonight were broadcast live to more than 170 countries,” he added. “That will make more people aware of Phuket and muaythai much more popular in the future.”