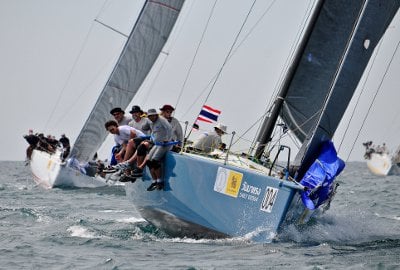 PHUKET: Kevin Whitcraft, owner and crew member of Wan Marang and president of the King’s Cup Regatta Organizing Committee talks about the development of Thailand as a sailing nation, and one truly classic regatta.

Who is the skipper of your boat this year?
Our skipper, Jaray Tipsuk, is a sailor who has won two silver medals in the SEA Games, and a gold in the J24 SEA Games in Singapore in 1996. When he was very young, he had a relative at the Thai Naval base and he used to go watch the kids training in Optimist boats.

The Captain Sunan invited him in and he was the best kid there. He went on to the World Championships immediately. That was around 1979. He began helming at Royal Varuna Yacht Club in the early 80’s and joined the national team in 1987 – the first year of the Phuket King’s Cup Regatta.

Is it easy or difficult to find highly competent crew members in Thailand?
We have an almost complete Thai boat crew for the 2012 Phuket King’s Cup Regatta, including a few Westerners who hold Thai citizenship. It’s relatively easy, in fact, to find skilled Thai sailors. We have a lot of history of sailing here in Thailand, with most of our crew competing on and off internationally for over two decades, myself included.

Consequently, many of the crew have been racing together for a long time. Some of the other team members are, or were, a part of the Thai national team, of which I was a part for six years. The Royal Varuna Yacht Club has been instrumental for developing experienced Thai sailors.

How do you gauge the level of improvement in experienced and new Thai sailors?
It’s definitely getting broader. I think the optimist program has been strong since the late seventies, and of course Thailand has maintained a strong reputation in sailing thanks to His Majesty the King.

Many of us have over the years put in time coaching optimists – and some of our crew have taught this for over ten years. We’ve got a culture and history of sailing in Thailand, so there’s quite a lot of improvement already there.

Does having a Thai speaking crew help in terms of communication and teamwork?
We panic in Thai! Definitely when things get intense the language is occasionally in Thai because it’s faster (laughs). But we speak in English as we have an American bow-man and a couple of Kiwis on the crew, so to give them half a chance, we talk in English.

The Phuket Dinghy Series has been effective in the development of young Thai sailors. Do many of them go on to crew large racing boats?
Not a large percentage, actually. The biggest ‘problem’ in terms of the development of sailing in Thailand is that Asian kids are focused more on studies when in their teens, and so they switch their focus to school following the growth of their experience in optimist.

The Yacht Racing Association of Thailand has tried to get the sport into universities so they now have sailing programs and they recognize qualifications in their student assessment activities. My kids are former optimist champions, but have continued to compete internationally in the 29er class.

People tend to fall away from sailing for a bit due to their studies and later due to their work commitments, but some come back and many of the crew out of Ocean Marina were former optimist sailors.

Is sailing a prohibitively expensive sport for most people?
Yes, it can be. You would regularly see 140 optimists and lasers competing in domestic events; then it (sailing) becomes more expensive and the field gets a lot smaller, not just in Thailand but internationally.

It’s possible for a group of individuals to split the cost for a small keelboat, so there are ways and means for newcomers to access the sport, at least at entry level. To get to racing class it’s pretty expensive, although there are a large number of Thai owners in the platu class, but it’s not that costly as a hobby. It’s reasonable, rather than affordable.

Please can you tell us about your boat?
The boat is from Croatia, and has been raced throughout the Med for about 18 months. It arrived the day before the Phuket King’s Cup Regatta four years ago. It’s very light – 4.5 tonnes and we’ve worked on it over the years.

Downwind we are pretty fast – it’s our fourth year on board so we’re pretty used to it, with all the new components we installed performing well. We’ve had a few practice weekends, which have helped us achieve strong finishes in 2012’s Phuket King’s Cup Regatta.

How you divide your attention between your roles?
When I’m out there on the water, I don’t even think about the Phuket King’s Cup Organizing Committee responsibilities much; the Committee, the organization, the structure, sponsorships and so forth. I’m just focused on being on the water and having fun, competing and challenging, pushing as hard as we can and being successful. And the jury, the organization and structure all help me in my capacity as President of the Phuket King’s Cup Regatta Organizing Committee.

We have an excellent PR team with Vivaldi, and the organizational teams do a great job with the course, and in providing international standard race management. And needless to say the parties are well organized as well.

Why do you hold the Regatta at Kata Beach?
Kata Beach Resort & Spa is a strong supporter of the Regatta, and a great host sponsor. You have to consider the number of rooms available, facilities, the award ceremony.

So Kata Beach Resort & Spa is perfect in many respects. It’s located in a beautiful bay and the resort is popular with Regatta competitors.

Is Phuket Thailand’s leading destination for sports sailing?
Not just for sailing, but for runners, divers, surfers, windsurfing; it’s an adventure sports playground. It’s such a beautiful area in which to be outdoors and living life to the full – a large reason behind why so many people come here, return here, and enjoy being here.

What would you say to newcomers who want to take up sailing?
It’s about getting started, so follow the advice of Nike and “just do it!” Get licensed, get your basic training down, and most importantly, get time on the water. That’s the key.

Same as when I coach Optimist sailors; it’s about experience and time spent getting out there and sailing.