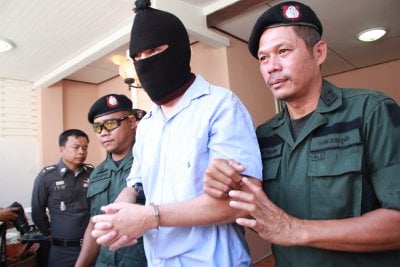 PHUKET: Moshe David, the prime suspect in the murder investigation of his former business associate Peter Reisz, this morning re-enacted the sequence of events that led to the death of Mr Reisz.

As with all public appearances since his arrest, Mr David was silent in front of reporters. However, Provincial Police Region 8 Commander Gen Yongyuth Charoenwanith announced to the press yesterday that the Hungarian-Israeli dual national had confessed to police to killing Mr Reisz in a fit of rage.

Gen Yongyuth explained that Mr David had accused Mr Reisz of swindling him out of land and properties valued at about 15 million baht.

Mr David this morning arrived at the house where the alleged murder took place, in a well-known housing development off Wichit Songkram Road, wearing a balaclava and under escort by about 30 police officers.

Phuket Gazette reporters were not allowed in the house while Mr David re-enacted the sequence of events that led to the death of his former business associate.

Mr David exited the house after about 30 minutes. He was still wearing the balaclava, but was now carrying a black plastic trash bag similar to the bag Mr Reisz’s body was found in.

The next stop on the re-enactment trail was the rubber plantation in the Soi Bang Thong area in Thung Thong, Kathu, where Mr Reisz’s body was found.

With his face now exposed, Mr David re-enacted how Mr Reisz’s body was dumped in the undergrowth.

“Police are still searching for him. At this stage, there are only two suspects that we have had arrest warrants issued for [Mr David and Mr Kvalka],” Maj Gen Choti told the Gazette.

However, Maj Gen Choti declined to comment on what action the police were taking in apprehending the Thai male suspect reported yesterday as wanted by police.