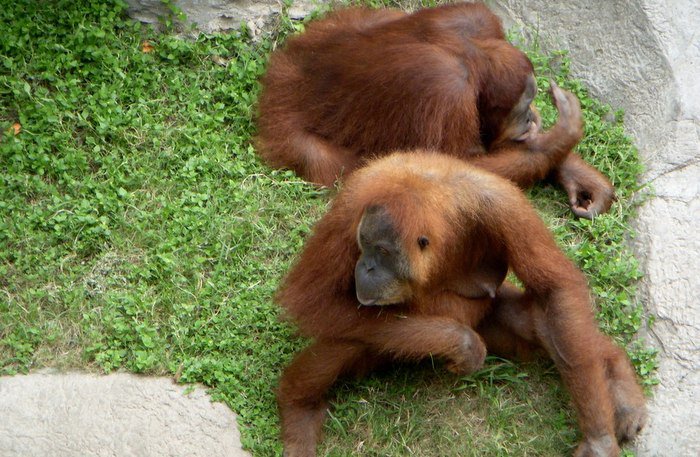 BANGKOK: A group of smuggled orangutans were returned from Thailand to Indonesia yesterday following years of diplomatic wrangling over who will care for them after the majority were discovered abandoned on a roadside.

Previous Thai governments sought compensation from Indonesia for the cost of housing and treating the 14 apes, but the junta government in Bangkok recently waived those demands and pushed ahead with the repatriation.

Indonesia sent a C130 aircraft to collect the animals, who were loaded in metal crates onto the plane before taking off from a military airport on the northern outskirts of Bangkok.

“Special care has been taken to ensure that the orangutans are ready to travel,” said Tuenchai Noochdumrong, director of Thailand’s wildlife conservation office, in a statement.

In Jakarta, preparations were under way to greet the returning animals.

“They will be greatly welcomed by the Indonesian government once they arrive back home. It is a homecoming,” Indonesian environment spokesman Eka W Sugiri told AFP, adding that the government was very serious about the conservation of orangutans.

Orangutans are native to the rainforests of Borneo and Sumatra but are often illegally smuggled throughout Southeast Asia, either for private zoos or as pets.

The 14 apes, who travelled to Indonesia with their Thai keeper, will be taken to a safari park in West Java for examination before being reintroduced to the wild, said Mr Sugiri.

He added that officials still needed to determine whether the apes came from Borneo or Sumatra.

Despite their reputation as gentle animals, orangutans are not suitable pets. One Thai man lost a finger when one of the rescued apes bit it off.

“It happened [a] long time ago, not during the preparation of this repatriation,” a wildlife official told AFP.

“It was a male orangutan who is quite fierce,” he added. “They are six times stronger than human beings.”

Of the 14 orangutans, 11 were found abandoned in Phuket in 2010. One was rescued elsewhere while two were born in captivity to the rescued parents.

In recent months, many apes in Indonesia have fled their forest homes after illegal fires set to cheaply clear land for plantations.

The fires and resulting region-wide haze occurs to varying degrees each year during the dry season, although in recent days persistent rains have doused many blazes and cleared the air across vast stretches of Southeast Asia.

Earlier this week, an animal rights group said it had released back into the wild an orangutan and her baby who were attacked by angry villagers in West Kalimantan province after straying out of their forest home to escape the fires.

Some locals view the apes as pests and there has been an increase in human-animal conflict in the area.