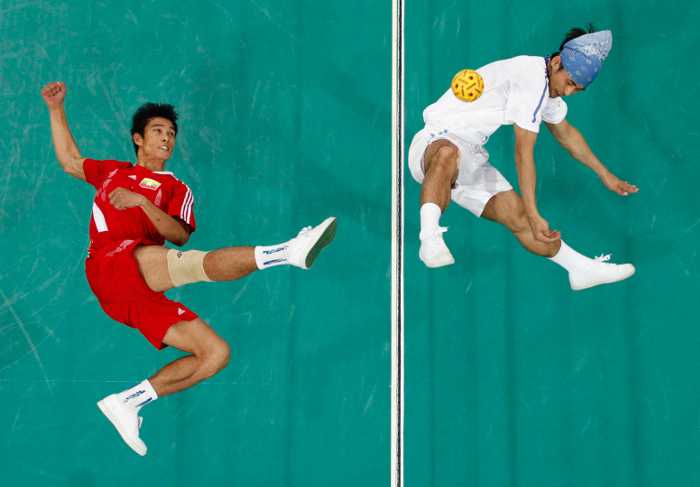 PHUKET: His teammates call him the “left-footed killer”, an unlikely nickname for a veteran athlete who plays in the same cheap plimsolls worn by common people throughout his native Thailand.

But with his prolific point-scoring record and deadly finishing, Pornchai Kaokaew carries Thailand’s hopes of delivering them yet another Asian Games gold medal in sepak takraw, an acrobatic hybrid of soccer and volleyball that has spectators gripped with its non-stop dynamism and flair.

Like most of Thailand’s team, Pornchai, 33, is a former soccer player and a soldier groomed by Thailand’s army to maintain the country’s tight stranglehold on a sport few outside of Asia have even heard of.

And a gold medal this month in Incheon, South Korea, brings the added bonus of one million baht (US$31,123), a sum equivalent to nine years of earnings on the basic salary of most Thai soldiers.

“It’s been another motivating factor for us to improve ourselves,” Pornchai told Reuters at a training camp before departing for the Games.

The Thais have won 18 of the 27 Asian Games gold medals awarded in the sport since it made its debut three decades ago, with the men’s team beating Malaysia in the final of the last four team events.

The two countries and Myanmar are among those which claim to have invented sepak takraw, where players cram into a small court and use their head and feet to juggle a rattan ball before teeing it up for one player to blast over the net, akin to a spike in volleyball, or a smash in tennis.

The sport is characterized by electrifying mid-air moves, including pinpoint volleys and bicycle kicks quicker than the blink of an eye, with teams made up of “killers”, “tekongs” and “feeders”.

Sepak takraw’s origins stretch as far back as the 15th century as evidenced by documents in museums of both Malaysia and Thailand. Murals can be seen today at Bangkok’s gilded Temple of the Emerald Buddha, or Wat Phra Kaew, which is seen by thousands of tourists daily.

Thai head coach Kamol Tankimhong doesn’t care who invented the sport but says his country has played a big part in advancing it, making it a permanent fixture in the Asiad and a blue ribbon event at the biennial South East Asian Games.

“I’m very confident that we can retain our gold medals like in every other Asian Games in the past.”

The Thai men’s team begun their campaign on Tuesday against South Korea in Group A at the Bucheon Gymnasium. This year’s hosts are the only non-Southeast Asian country to win a sepak takraw gold, having claimed the men’s circle title in 2002.

Thailand is banking on Pornchai to deliver the goods. He has played the sport for 22 years, during which he has honed his kicking skills by spending hours working with a ball tied to the floor.

This week, he’ll be wearing his trusted “Nanyang” plimsolls, the 400-baht shoes he prefers to modern performance footwear.

“I’ve tried out many other types of shoes but Nanyangs are the best,” he added.

Thailand is led by team captain Suriyan Paechan, playing in his fifth games since winning gold in the 1998 tournament. He soon turns 40 and this could be his swansong year.

“To carry on playing another four years would be difficult. I’d be 44 by then,” he said. “I’ve set a target to perform my duties as best as I can and to have my name go down in history by obtaining another gold medal.”

Before he bows out, Suriyan wants to see the sport gain traction outside of Asia and says the high level of skill and the drama it generates warrants a bigger international profile.

“I’d love it for foreigners to play Takraw,” he said. “Takraw has a lot of character. It’s exciting to see people jump and do flips in the air.”