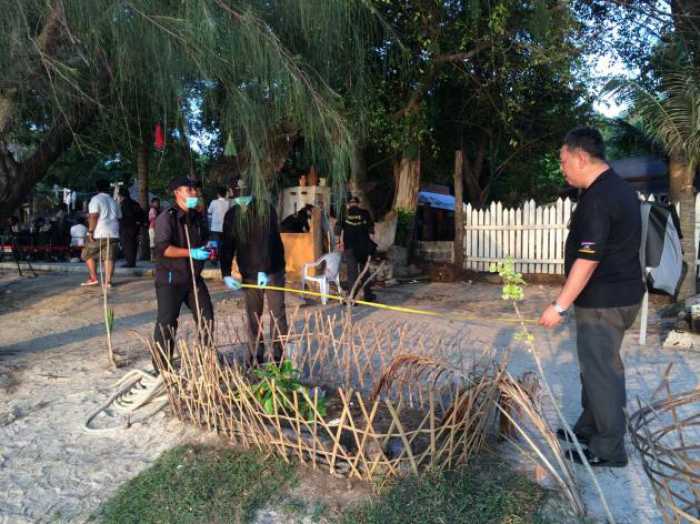 PHUKET: Nearly two weeks since the gruesome murders of two British backpackers on Koh Tao, the killers are still at large. Worse still, police have pinned all their hopes on the DNA test results of samples they have collected from almost everybody on Koh Tao, to see if they match those found on the victims.

Police yesterday intensified their interviews with people on Koh Tao, off Surat Thani province, in a bid to learn about the last hours before the killings.

For now, police believe the murders were sexually motivated, as none of the victims’ belongings were missing, Pol General Kiattipong Kaosam-ang, a provincial police commander, said yesterday.

“The motivation for the attack is rape, because we found the belongings intact on the victims’ bodies,” he said.

Referring to a cigarette butt found near the bodies of the victims, Kiattipong said the attackers might have been smoking when the victims walked by. The attackers, who probably used drugs, then followed them, raped the woman and killed the man.

He said about 50 per cent of the investigation had been completed. Police are now waiting for results of the DNA tests. If any matches are found, police can issue an arrest warrant for the suspect, he said.

As of yesterday, police had collected about 200 DNA samples from people on Koh Tao, mostly immigrant workers.

Meanwhile, a police source said that of the 200 samples, results of 34 were available and none of them were found to match those found on the victims. Police expect results of the other tests soon.

The DNA samples were collected from many groups of people on the island, including Thai employees who were near the crime scene, the victims’ friends and those seen on security cameras on that day. There are still some people we are looking for, he said.

Among the difficulties in looking for the killers is that there are about 4,000 migrant workers from Myanmar on the islands and not all of them are registered. The killers may already have left the island, Kiattipong said.

Police have focused their investigation on migrant workers on the island and it is likely that some Thai superiors are involved. Fishermen were unlikely to be the killers as their boats were docked on the other side of the island, far from the crime scene. Tour boats were also not near.

An important piece of evidence collected from the scene was a condom that had the DNA of the female victim, Kiattipong said, insisting that police believe there were two or three attackers.

Tourism and Sports Minister Kobkarn Wattanavrangkul will meet with tourists and tourism operators in Koh Tao this Sunday in a bid to restore confidence and seek prevention measures to avoid the re-occurrence of such crimes.

“The minister will spend the whole day on the island. She will also collect tourism information about the situation to find ways to revive business,” a Tourism Authority of Thailand representative said.

Thailand’s image as a tourist destination has been damaged by the murders, which made headlines in the international media. However, airlines operating between Thailand and Britain have confirmed that passenger numbers are continuing to increase.

In Japan, TAT and Thai operators are now joining “JATA Tourism Expo Japan 2014”, where many were asking about the security situation in Thailand.

German ‘beggar’ to be deported