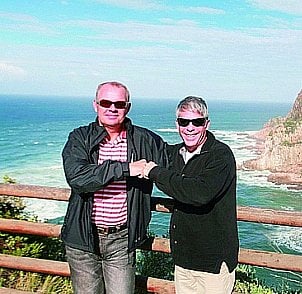 Victory in Bangkok at the qualifying tournament in March this year, awarded Michael and Kenth the opportunity to represent Thailand at the 36-hole challenge final. Played on the Jack Nicklaus designed Simola course in Knysna, the resort hosted the Danish football team for last year’s World Cup.

Having played themselves into a good position after the first round in fine conditions, Michael and Kenth arrived for the second day’s play after an overnight downpour.

“We were certainly playing well after 18, but we learned that 117mm of rain had fallen overnight which made the course almost unplayable. In the end, we managed only eight more holes before the tournament was called off,” Michael said.

“Teams such as India and Northern Ireland were very strong up to that point, so I doubt we could have won, but to finish equal fifth out of 20 international teams wasn’t a bad performance,” he added.

One incident that did not sit well with Michael, the organizers and the competitors, was when a member of the Mexican team was found to have falsified his handicap.

“We were sitting with the player when tournament organizers confronted him after an investigation into his playing background. He had claimed to have a handicap of 20, but in fact was playing off 8.6 in Mexico. He was immediately ejected from the competition. They take their golf very seriously in South Africa,” Michael said.

“The experience was just fantastic. Challenging golf courses, outstanding hospitality and even though you meet a group of strangers, there’s an instant bond because of golf,” Michael remarked.

Former US Open winners Retief Goosen and Tony Jacklin were also in attendance. Goosen owns a vineyard in the area and helped sponsor the event through his award winning wine label The Goose.

Jacklin gave an after-dinner speech offering advice and golfing anecdotes to the competitors and all at the function observed a minute’s silence for the passing, and in tribute to, the great Severiano “Seve” Ballesteros Sota.

The WCGC began in the UK in 1993 and has grown to include 30 countries and over 150, 000 participants. Organized by the Golf and Events divisions of Diethelm Travel, the Asian section hopes to expand into new markets throughout the region for upcoming events next year and in 2013.