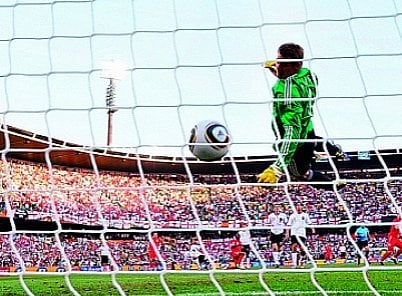 PHUKET: I USED to love football. A game for thugs played by gentleman as the saying partly goes. My father played for Glentoran in Northern Ireland and in later years he became a respected referee. My younger brother followed this officious capacity in sports and became an international hockey umpire.

As one can imagine, our household was never short on sports arguments and especially debate regarding contentious decisions in football such as off-sides, red cards and goals, made by the men in black, as once they wore.

Irrespective of the different teams we supported, or our personal interpretation of incidents on any given Saturday or Sunday, to this day we agree on one aspect of sport. We continually ask the same question: Why the hell hasn’t football introduced goal-line video technology?

The argument against the use of technology usually involves the nonsensical and archaic fear that the “human aspect” would be removed. Supporters of the obtuse Sepp Blatter, president of FIFA, use this argument in association with the costs of introducing the technology, which for anyone genuinely interested in the development of the game, can only lead to questions of a sinister or conspiratorial nature.

In the first instance, using video replay as a tool to help reduce unnecessary controversy in sport has no down side.

Remember, this is “goal-line” technology can be used to answer questions such as: did the ball cross the line?, was it a hand ball?, was it a penalty? These decisions can directly affect a goal being awarded.

Off-sides, fouls outside the penalty area and carding players would remain under the direct responsibility of the referee and his assistants.

Many a referee has made incorrect decisions which adversely affect the outcome of an important game, costing a team valuable points or continuation in a competition.

The litany of errors is too great to offer in any great detail, but recent incidents of note include Thierry Henry’s handball against the Republic of Ireland which secured France’s inclusion to last year’s World Cup and prevented a worthy Irish team from competing in South Africa.

During that very World Cup Frank Lampard scored for England against Germany in the last 16 stage at a crucial point in the match, but the goal was not acknowledged by the Uruguyan referee Jorge Larrionda.

Mr Lampard’s fortunes were recently reversed when he was awarded a goal playing for his club Chelsea in a Premiership game against Tottenham.

Spurs goalkeeper, Huerleho Gomes stopped the ball from completely crossing the line, but his remonstrations to the officials were denied, where television replays showed him to be correct.

Copious amounts of money infest football and yet the powers that be have the audacity to suggest this technology is too costly to implement.

This seems a ludicrous statement when we consider the employment of a fourth official at matches whose ineffectual purpose is to prevent managers from stepping outside their designated zones and to hold aloft a digital board indicating substitutions and added time.

His redundant presence would be better served sitting with a television crew, prepared for when referees require verification on a pending goal issue, replaying and offering advice once checked.

Other sports not as affluent as football have employed a range of technologies to help with officiating. Tennis first introduced line technology in 1974.

Cricket has used a sensitive microphone system called the “snick-o-meter” to pick up the sound of ball on bat since 1999 and shortly after that in 2001, brought “Hawkeye” to the game, which shows the path of a ball. In 2006 the sport introduced another development called “Hot Spot” which uses infra-red cameras to determine the strike point of a ball.

Rugby too has introduced try-line technology, allowing the referee to consult with a fourth official to determine the legitimacy of a try and only tries.

Importantly all these sports have not only introduced technology, but also kept decision making powers with the aforementioned “human aspect”, referees and umpires.

In tennis, players are allowed a certain number of challenges to line calls. In cricket, players are similarly allowed to query an umpire’s decision, again with a limit per team.

And rugby also gives captains the opportunity to review incidents and allows the use of replays after matches to cite players who have infringed laws that were not identified during games.

There should be the introduction of goal-line video replays in football matches and post-match citations for any incident during a game. This would mean referees would not have to put up on-pitch delinquents harassing them at close quarters.

In today’s game, professional football players have it all too easy across the board. With their over-inflated paychecks, matched only by their egos, these players bask in the spotlight of premature publication of their autobiographies and messy paternity suits. They bring the game into disrepute.

If football does not catch up with the momentum of technology in sport, gentlemanly conduct and fair play will be lost.

After all, we don’t want to have “a game for thugs, played and organized by thugs.”

Legends to match up at Thanyapura, Phuket