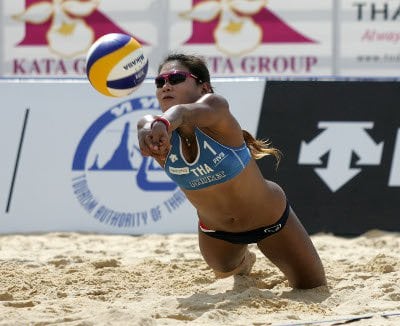 Two teams each from Australia and the Czech Republic advanced along with teams from Brazil, Belgium, China and the United States.

Seeded at number two for this tournament, Kessy/Ross defeated number 29 seeds Inese Jursone/Inguna Minusa from Latvia 21-12, 21-15 in a first-round match that lasted 34 minutes.

Having lost to the the Canadian pairing of 18th-seeded Heather Bansley/Elizabeth Maloney in the first round last year, the Americans avenged the defeat with an efficient second round victory this year 21-10, 21-14 in 33 minutes.

“I liked how we passed, served and our ball control today, but I have to improve my transitional setting and block a little better. I feel a lot better this year than when I tried to play so sick last year. It was hot and humid here today, but still pretty good weather. Phuket may be the best natural beach we play on during the FIVB Swatch World Tour,” said Ross

“We really haven’t had much time off since August when we played in the last world tour event. We played in some domestic events in the US and had a solid three weeks of practice to get back to the basics. I need to get better on my jump serves and improve my setting, but we definitely weren’t rusty at all today,” Kessy remarked.

Australians Natalie Cook/Tamsin Hinchley, seeded eighth, are through to round three while the other Aussie pairing, 19th-seeded Louise Bawden/Becchara Palmer, upset the ranking by beating number three seeds, Carolina and Maria Clara Salgado of Brazil in three sets.

In addition to the eight undefeated teams, 16 additional teams remain in the competition with one defeat each.

The eight teams that were beaten twice on Thursday will all place 25th officially and each team will split a purse of $2,000.

Following Friday’s second round, the semi-finals will bring Saturday’s play to a close and medal matches will be played on Sunday. The winning pair shares US$30,000 first-place prize while the silver medal team will split US$21,000, the bronze US$15,000 and the fourth place team will divide US$11,200.

On-site this week in Phuket is a special production crew from IMG, the company that produces the live international telecasts of select matches, and also the weekly FIVB Beach Volleyball Swatch World Tour highlight show that is syndicated throughout the world.

The Phuket Thailand Open is being produced by Pentangle Promotions Co., Ltd. of Bangkok in association with the FIVB and the Thailand Volleyball Association.

The Phuket Gazette and PGTV is a charter sponsor of the FIVB Volleyball Swatch World Tour Phuket Thailand Open powered by PTT.

Thailand U23s all at SEA against FC Phuket