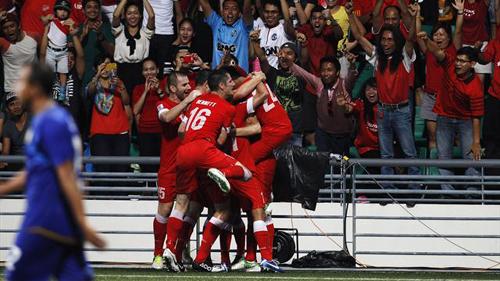 Defender Baihakki Khaizan smashed home the third goal from centimeters out in the 91st minute of the match played on the artificial turf at the Jalan Besar Stadium to give his side a big advantage ahead of the second leg in Bangkok on Saturday.

“It was really important to win this game and the boys have done that,” Singapore coach Raddy Avramovic told reporters.

“Both teams are capable to score goals, both can win home and away, we are in some way lucky we have a good result. It is now up to us to go to Thailand and try to score, because if we don’t it will be very difficult.”

Three-times winners Thailand had impressed going undefeated en route to the final with their fast flowing technical play and they were heavy favorites to win the biennial tournament for the first time in a decade prior to the first leg.

Singapore, though, were quick out of the blocks, pressing the Thais back, and the home side were rewarded with a penalty in the ninth minute after defender Piyaphon Buntao hauled down Bosnian-born Aleksandar Duric in the area.

Midfielder Mustafic Fahruddin sent the Thai goalkeeper the wrong way at the second attempt after the Japanese official had ordered the kick to be retaken because of encroachment.

Thailand eventually found their form in the second period and grabbed an equalizer just before the hour mark. Singapore left back Shaiful Esah was caught in possession and Teerasil Dangda broke down the flank before pulling a cross back for Adul Lahso to steer home for the vital away goal.

They were level for just three minutes, however, with striker Khairul Amri restoring the home side’s advantage with a neat finish at the near post after swivelling away from the hesitant Thai defense.

Both sides had chances to grab another goal before Thai goalkeeper Kawin Thammasatchanan failed to deal with a deep corner to the back post with Baihakki on hand to smash the ball into the roof of the net after it fell kindly for him.

Thai coach Winfried Schaefer shrugged off the defeat and said his side would give their all to try and overcome the two-goal deficit in the second leg.

“I have trust in my team. I know my team. I’m sure we will win this next match,” he told reporters.

A 2-0 win would be enough for the three-time champions Thailand to win the title that has eluded them since 2002 but if the Singaporeans, who also won the title three times, are able to score the Thais need to win by at least three goals.