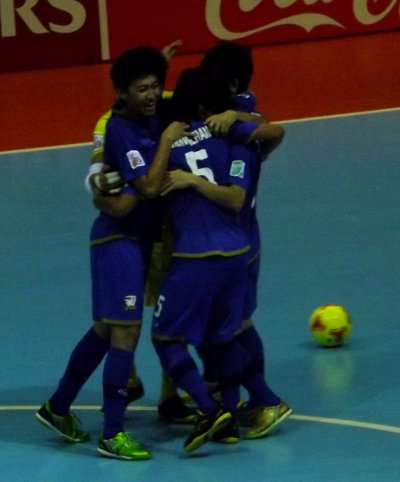 BANGKOK: The 2012 FIFA Futsal World Cup kicked off in extraordinary fashion last night with four sensational matches in Bangkok and Nakhon Ratchasimaj, highlighted by a total of 21 goals scored.

Hosts Thailand lived up to the Asian futsal world’s expectations in their Group A opener with CONCACAF champions Costa Rica, in which the War Elephants prevailed by a score of 3-1.

Following a welcome speech by PM Yingluck Shinawatra, the Thais sated the appetite of an energetic home crowd, going up 2-0 in the first half, with each side scoring a goal in the second half.

Costa Rica’s consolation goal was scored by Diego Zuniga in the 36th minute.

Played at the 6,000 seat Hua Mak Indoor Stadium in East Bangkok, the match was the second Group A showdown of the evening.

The opening match of the group and the tournament overall, was played between Group A favorites, world no 8 Ukraine and no 10 Paraguay, who drew 3-a-piece.

Paraguay’s Enmanuel Ayala scored a hat-trick being dismissed late in the game with his second yellow card.

Ukraine capitalized on their power play (having a temporary one-man advantage) with Maksym Pavlenko scoring his second of the game to level the scores in a tense match’s final minute.

Ukraine’s other goal came from Petro Shoturma in the 34th minute.

Sharing the points of the tournament opener, the two sides now sit in 2nd and 3rd place of the group, with Thailand enjoying the group’s top spot – at least for now.

Thailand’s next match against Ukraine, on Sunday evening at 7pm will be a bigger challenge.

Thailand Coach Victor Hermans, a Dutch national, acknowledges that Thailand will be the underdogs in the upcoming match.

“Not to say anything bad about Costa Rica, but Ukraine are at a higher level,” he admitted at a press conference after his side’s victory

“But like Costa Rica did tonight, I expect Ukraine to try to stretch out our defense… Our best defense will be to put more pressure on the ball… the key word for us is ‘control’. I tell my boys that if they can control the ball for 14 seconds and play the systems, then we can score,” he added.

The other two match’s were from Group C: Portugal breezed past Libya 5-1 in its match played in Nakhon Ratchasima’s Korat Chatchai Hall; Likewise, Brazil handled Asian Champions by a score of 4-1.