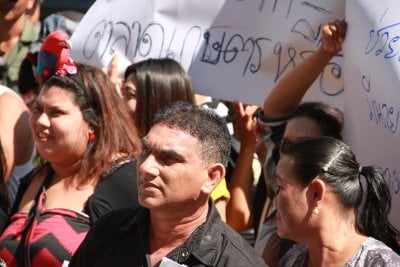 PHUKET: About 50 market vendors gathered at the Phuket Provincial Office yesterday afternoon to protest being relocated to a new market site near Phuket Country Home in Chalong.

The vendors are facing eviction from their current site of 10-rai where the Chalong Clinic (also called the “Chalong Health Promoting Station”) now stands, but is hoped to soon become home to the new Chalong Hospital.

Chamcharn Patarn, a vice president of the Kaset Market vendor group, said, “We don’t want to move to the new site because the area near Phuket Country Home is deadly quiet and the streets have big, deep holes in them.

“Some people have told me they will not go there to shop. They will go to Tesco or other supermarkets nearby, instead,” he added.

Mr Chamcharn urged officials to allow the market vendors to continue selling their wares at the current 10-rai site.

“Chalong Hospital has been allocated 10 rai, but our market occupies only two rai. Why can’t the hospital take eight rai and let the market stay where it is now?” he asked.

“About 600 people in Chalong, Karon, Rawai and places nearby visit the market each day,” the letter said.

As Governor Maitri was unavailable to receive the petition in person, representatives accepted it on his behalf.

In July, Chalong Mayor Samran Jindapol handed a formal letter of complaint to Public Health Minister Witthaya Buranasiri for the ministry’s failure to provide 186 million baht in funding for the establishment of the new hospital.

The financial package, provisionally agreed to by the Cabinet at the mobile meeting on Phuket in March, was to turn the Chalong Clinic into a fully-functioning, 30-bed hospital, complete with ER facilities and medical staff accommodation.