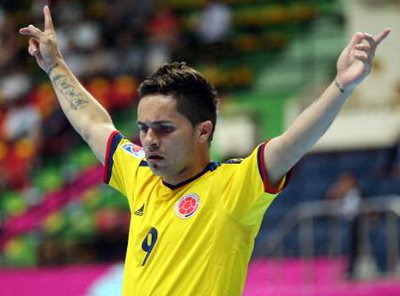 PHUKET: The island’s pro futsal club, Phuket United, are looking to sign Andres Reyes, one of the up and coming stars showcased at the FIFA Futsal World Cup 2012, held in Thailand earlier this month.

Phuket United Assistant Coach Patt Srivijit told the Phuket Gazette that the team is planning to get in contact with Andres Reyes about a possible transfer.

Reyes caught the attention of futsal fans and recruiters from around the world after he scored four goals and led the Colombian national team to finish fourth in the seventh edition of the Futsal World Cup.

“Our aim is to sign Reyes as he is a good player and one of the standout players of the World Cup. We have already worked out a salary for Reyes and we would like the chance to negotiate with him,” Srivijit said.

Andres Reyes is a winger who plays for Deportivo Tachira in Venezuela.

Colombian players have been attracting scouts for a number of months with Thai scouts also looking at midfielder Angellot Caro.

Caro, Reyes and Jonathan Toro were the three biggest names in Colombian futsal before the World Cup, but the nations run to the semifinals put the spotlight on the whole team.

Coach Patt said he is hoping Phuket United will sign at least one new foreign player by next week along with a Thai player.

The team’s next fixture is against Surat Thani on December 8.

World Golf: Long putter expected to be outlawed for 2016