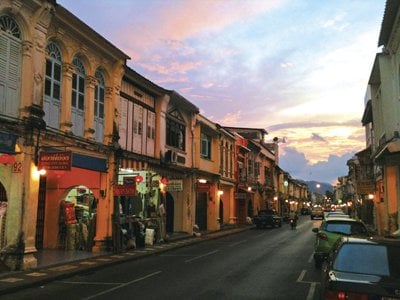 PHUKET: Historic architecture is fascinating. Architecture surviving from a particular time in history can tell us a lot about that period.

For example, the cultural influences of the period, the way people lived, their religious beliefs and a lot more.

One of the most interesting aspects of historical architecture is the clever designs and features that are purposely built into the buildings to solve peoples’ everyday problems. Some of these ingeniously simple techniques were commonly used and incorporated into buildings throughout history.

Yet in today’s modern world, they have become obsolete and forgotten with the advent of modern day power and electricity.

Sino-Portuguese architecture is a common and beautiful sight in old Phuket Town.

This type of architecture can be seen in many of the buildings in Phuket Town, from the rows of old shop-houses on Thalang and Dibuk roads, to large mansions that once belonged to the wealthiest tin families on the island.

They have a lot of distinctive and curious features rarely seen elsewhere. Many of these features were incorporated into the buildings for different reasons.

In some cases it was seen as good Feng Shui. In some cases it was due to superstition. But one often incorporated feature of many old Sino-Portuguese buildings, the water pond in the middle of the building, actually served an important purpose. It was used to cool the entire building.

Phuket is a tropical island and it is hot and humid throughout the year. Nowadays if the weather gets too hot, we simply switch on a fan or an air-conditioning unit. But in the past, people had to take a different approach to cooling.

A typical Sino-Portuguese shop-house building in Phuket Town is not very wide, but incredibly long.

Residents back then would have filled it with water, fish and aquatic plants. The opening in the ceiling would allow rain to fall directly onto the pond, filling it occasionally, whilst also allowing the sun to shine through and fresh air to ventilate the entire building. It must have been a nice spot to sit and socialize with friends and family.

But the sky view and indoor pool does more to cool the building than just allowing air circulation. When the buildings heat up in the hot tropical sun, the water evaporates directly from the pond. Water vapor leaves the building through the sky opening. When it does it brings down the temperature within the entire building.

Because of this cooling system, the temperature within the buildings was well regulated and far lower than the outside temperature.

It was a simple and low-cost cooling system, yet it must have been quite effective judging from the number of Sino-Portuguese buildings and mansions that adopted it.

In theory it seemed to work, but in practice it may have worked wonders. The pond and open ceiling system have been used in many cultures to deal with excessive heat throughout history, in all sorts of buildings.

The Rajasthanis for example have been living in the desert climate of north-western India for thousands of years. They are renowned builders and many of their buildings feature a similar water cooling system.

Recently, Manit Rastogi, an award-winning architect, has taken a page out of the history books and incorporated this cooling technique in his design of the Pearl Academy of Fashion, located in the blisteringly hot capital of Rajasthan, Jaipur.

The Pearl Academy is a new building but it has the same pool-under-the-open-sky feature built into the middle of the structure. The pool is built into the ground and is around 4 meters deep. It is enough to create a micro-climate within the building.

On a typically hot day, the Pearl Academy building is 20 degrees Fahrenheit cooler than the outside temperature. It does so without the use of air-conditioning or electricity whatsoever.

In today’s modern world most of the solutions to our problems require us to use energy. As a result our demand for energy has become insatiable. Perhaps for a change, we could look back at what our ancestors did when faced with similar problems.

Many issues are not new or exclusive to our generation. We just got used to dealing with them in a different, more energy intensive way. Perhaps in this age when we so desperately need to cut down on our energy consumption, it is time to bring back some of those “obsolete” methods that have been used throughout history.

On The Menu: Very Versace